Spotted: Priyanka Chopra On The Sets Of Her New Hollywood Film

Priyanka Chopra, wearing a tangerine dress, was spotted on the sets of A Kid Like Jake, in which she reportedly plays the role of a single mother 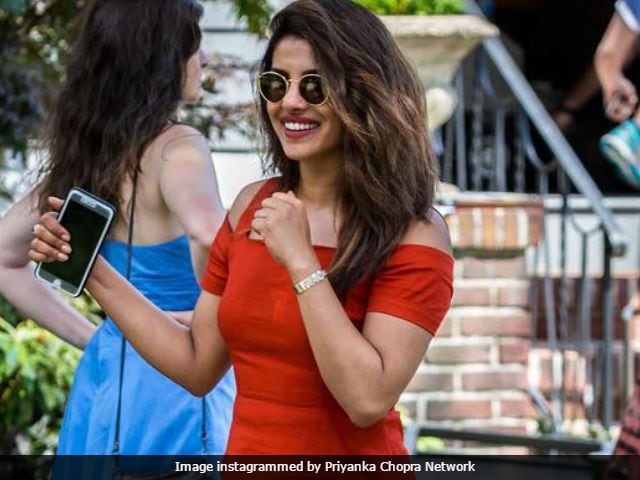 New Delhi: Actress Priyanka Chopra is back at work. The 34-year-old actress was spotted on the sets of her next Hollywood project, titled A Kid Like Jake. Priyanka started her Hollywood career with Baywatch, which released and tanked in May. Priyanka has moved on and is already busy with the Silas Howard-directed independent film, which also features actors Jim Parsons (The Big Bang Theory) and Claire Danes (Homeland). On Tuesday, social media shared various pictures of Priyanka, wearing a tangerine dress, with periwinkle blue heels. Pictures of Jim Parsons and Claire Danes from the sets of the film are also circulating on the Internet. Priyanka reportedly plays the role of a single mother in the film and her character's name is apparently Amal. A Kid Like Jake is produced by Jim Parsons and his husband Todd Spiewak.

Here are pics of Priyanka Chopra, Jim Parsons and Claire Danes from the sets of A Kid Like Jake.

New: #priyankachopra on set of #akidlikejake

After completing her portion for A Kid Like Jane, Priyanka will reportedly move on to her next Hollywood project (yes, her third film). Priyanka will co-star with Rebel Wilson, Adam Devine and Liam Hemsworth in Isn't It Romantic.

Promoted
Listen to the latest songs, only on JioSaavn.com
Priyanka's popular television series Quantico was renewed for the third season and the shooting for the show will begin soon after Priyanka is done with both the films. Priyanka plays the lead role of Alex Parrish.

Meanwhile, Priyanka Chopra recently visited India for a short duration, in which she has reportedly finalised Sanjay Leela Bhansali's film as her next Hindi project.