Outside the Rae Bareli's Congress office, a poster with a photograph of Sonia and Priyanka Gandhi, said that she and her mother are seen going to the temples during election time but are never seen in the city during any crisis. 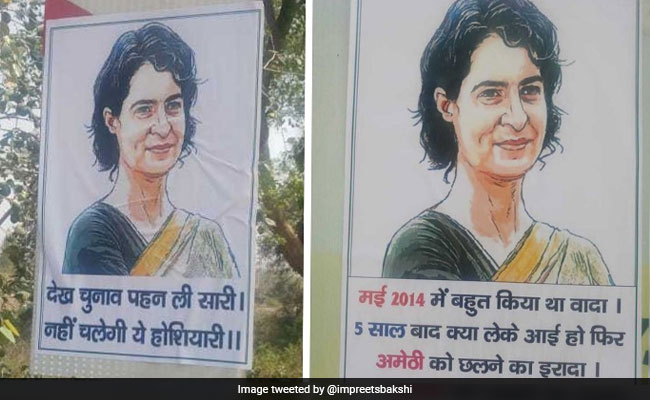 One of the posters in Amethi suggested that Priyanka Gandhi wears saris to influence voters.

Congress general secretary Priyanka Gandhi Vadra is on a campaigning spree in Uttar Pradesh. After visiting Amethi, she today visited Rae Bareli, the parliamentary constituency held by her mother and UPA chairperson Sonia Gandhi. Posters against her appeared in both the places.

Outside the Rae Bareli's Congress office "Tilak Bhawan", a poster with a photograph of Sonia and Priyanka Gandhi, said that she and her mother are seen going to the temples during election time but are never seen in the city during any crisis.

"Votes were given so that they could serve (us), but Sonia-Priyanka disappointed us," the poster further reads.

Here's the poster in Rae Bareli:

Posters again come up in #RaeBareli slamming #PriyankaGandhi#Vadra, who is in her mother #SoniaGandhi's parliamentary constituency.#Dangal2019#LokSabhaElections2019

During Ms Gandhi's Amethi visit yesterday, posters with her sketch dotted the walls. "Kya khoob thagti ho, kyun paanch saal baad hi Amethi mein dikhti ho (Why do you fool us and show up in Amethi only after five years)," one of the posters said.

"May 2014 mein bohot kia tha wada, paanch saal baad kya leke aai ho phir amethi ko chhalne ka irada," (You had made several promises in May 2014. Have you come again after 5 years to deceive us), another poster read.

One of the posters also suggested that she wore saris to influence voters.

In Amethi, her brother Rahul Gandhi's constituency, the newest Gandhi in the Congress said she was ready to contest the national election "if her party wanted".

She joined politics in January after years in the Congress backrooms and is the party's in-charge of eastern Uttar Pradesh.