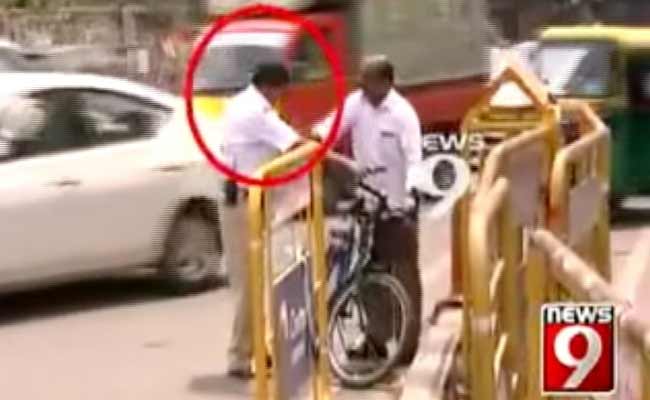 A grab from the footage showing the interaction.

In Bengaluru, the city which makes green corridors for human hearts, a traffic policeman was apparently caught on camera manhandling a retired army personnel who was trying to clear the way for an ambulance.

The policeman, Sub-Inspector Gaganna, has been suspended pending inquiry, said Additional Commissioner of Traffic B Dayanand.

The incident took place at Cauvery Junction, near the upmarket Sadashivanagar area.
The ambulance, carrying blood for storage, had been stopped at the traffic light. That was when the retired armyman, Nagappa, tried to remove a rope barricade to enable the vehicle to pass.

As the ambulance moved away, in the footage, the policeman was seen moving in. He pushed the retired army man.

Promoted
Listen to the latest songs, only on JioSaavn.com
Admitting the incident, Mr Dayananda said, "There has been some verbal altercation and pushing. The DCP Traffic East has gone to the spot and verified the incident. The behaviour of the sub-inspector is not justified."

"The person who has removed the rope and allowed the ambulance to pass, he has done a good thing, we do appreciate it," he added.