COVID-19 Vaccine India: "People speak of fever as a side effect of vaccines. but a political party experienced fever after 2.5 crore vaccines were administered on my birthday," PM Modi said. 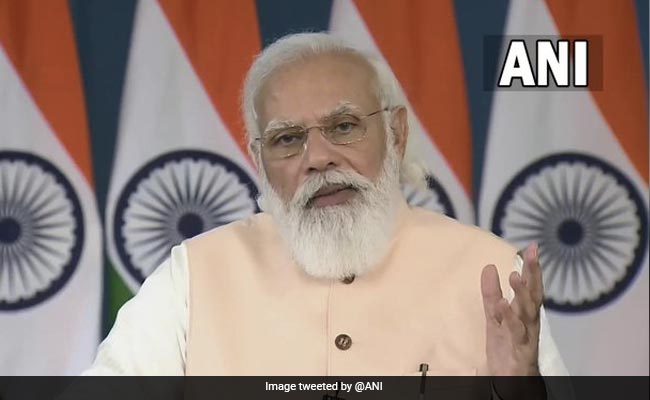 PM Modi said it was an "emotional moment" for him on record 2.5 crore vaccine doses on his birthday

Prime Minister Narendra Modi today said it was an unforgettable and emotional moment for him as over 2.50 crore COVID-19 vaccine doses were administered in the country on his 71st birthday.

"With your efforts, India has created a world record of administering over 2.5 crore vaccines in a single day, a feat not even the most powerful nations have been able to achieve," PM Modi said during an interaction via video link with healthcare workers and beneficiaries in Goa.

PM Modi said he appreciates all doctors, medical staff, and people in administration in the country for this effort. The huge effort and skilled manpower needed to accomplish this task show the might of India, he added.

"Birthdays come and go but I have been away from such things. But yesterday was emotional for me. It has become an unforgettable occasion for me," PM Modi said.

Without naming any party, PM Modi said "a political party" developed fever after over 2.5 crore vaccine doses were administered on his birthday.

"People speak of fever as a side effect of vaccines. but a political party experienced fever after 2.5 crore vaccines were administered on my birthday," he said.

PM Modi praised Goa Chief Minister Pramod Sawant and his government for overcoming challenges in accomplishing 100 per cent vaccination of the first dose of covid vaccines in the coastal state.

Goa is on way to becoming a leading state in India as far as vaccination is concerned, PM Modi said.

"Goa is playing important role in the success of the world's largest and fastest vaccination drive - 'Sabko vaccine, muft vaccine'. In the past few months, Goa fought bravely against heavy rainfall, cyclone and flood, under the leadership of Pramod Sawant," he said.

When they are aware that all people are vaccinated, tourists will also feel safe and flock to Goa in more numbers, he said.