As per the police, the value of the suspected drugs seized near the border in J&K's Uri is around Rs 20-25 crore in the black market. 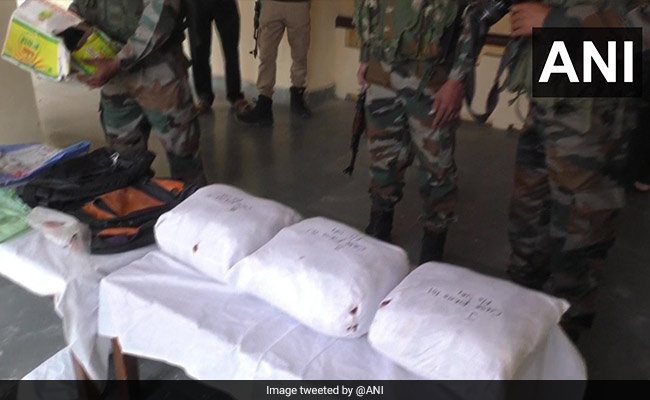 J&K: Police said they're working in coordination with Army to investigate the drugs haul case.

Security forces seized over 25 kilograms of drugs-like substance, in packages with "Pakistani markings", near the Line of Control (LOC) in Jammu and Kashmir's Uri sector on Saturday.

As per the police, the exact nature of the "heroine-like substance" is being ascertained through concerned authorities, and the value of the suspected contraband is around Rs 20-25 crore in the black market.

Rayes Mohammad Bhat, Senior Superintendent of Police (SSP), Baramulla said, "On October 2, alert army troops witnessed some suspicious movement near the LOC in the Uri sector. Upon reaching the spot, they recovered bags and cartons with Pakistani markings which contained 25 to 30 kilograms of contraband material, which are currently worth Rs 20-25 crore in the market."

Mr Bhat said the police is working in coordination with Army to investigate the case.

As per an official statement of the Army, the contraband substance has been handed over to the police and legal proceedings have been started.

"The huge drug haul along the Line of Control showcases the nefarious designs of Pakistan-based narco-terror nexus and its inimical intent to abet terrorism and finance terror in India. This drug bust is a huge setback to the Pakistan narco-terror nexus," the Army said.

This drug haul in Uri Sector comes just days after one Pakistani origin terrorist was neutralized and another namely Ali Babar, resident of Okara, Pakistan captured alive, in Uri Sector in an extended search operation culminating on September 28.