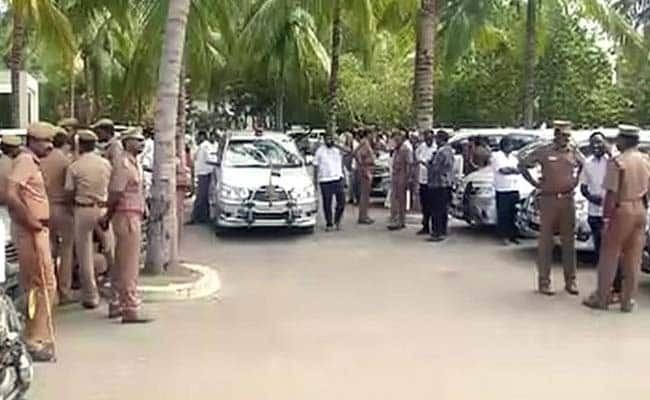 New Delhi: As she headed to a jail in Bengaluru after being convicted for corruption, VK Sasikala was charged with kidnapping by a lawmaker who claimed a dramatic escape from the luxury resort where over 100 AIADMK MLAs have camped for a week. Soon after the complaint was filed today, a large contingent of policemen in riot gear moved into the Golden Bay resort, around 80 km from Chennai.

The police complaint has been filed by S Saravanan, the lawmaker who claims he climbed the walls of the resort on Tuesday evening and ran away, dressed in a "T-shirt and Bermuda (shorts)" to disguise himself. Mr Saravanan pledged support for Ms Sasikala's challenger O Panneerselvam yesterday.

Investigating his complaint, the police arrived at the resort and questioned each lawmaker while commandos waited outside, ready to move in if needed.

"We have brought in commandos as a precaution," said a police officer.

The lawmakers, guarded closely all this time, interacted freely with the media this morning. Last night, Ms Sasikala left the resort for Chennai after staying the previous night. Hours later, her nephew TTV Dinakaran arrived at the resort and appeared to take over the "vigil".

"The police questioned us and asked if we had forcibly made MLA Saravanan stay at the resort. We showed the cops the room he stayed in. His claims are not true," said lawmaker IS Inbadurai. He accused Mr Saravanan of going to the police as an "afterthought", to create political instability. Mr Panneerselvam, who fought Ms Sasikala's attempt to replace him as Chief Minister, has alleged that the lawmakers were held at the resort against their will. The allegation is false, the police told the court on Monday, asserting that no lawmaker had complained about being held captive.

Mr Inbadurai said it was Mr Saravanan who had emphatically denied being forced to stay at the resort when the police had last questioned lawmakers before reporting to the court.

Promoted
Listen to the latest songs, only on JioSaavn.com
The Supreme Court yesterday held the long-time friend of former Chief Minister J Jayalalithaa guilty of corruption and ordered her to surrender and serve a four-year jail term.

The order has firmly lidded Ms Sasikala's plans to become Chief Minister of Tamil Nadu just days after her political debut as the ruling AIADMK's chief. In what is interpreted as a move to secure control over the party, she has promoted loyalist E Palanisamy as candidate for Chief Minister and has also brought back relatives expelled by Jayalalithaa, including Mr Dinakaran.