The weather system is set to form over the north Bay of Bengal during the next 24 hours under the influence of a cyclonic circulation, which lies over west Myanmar, the Bhubaneswar Meteorological Centre said. 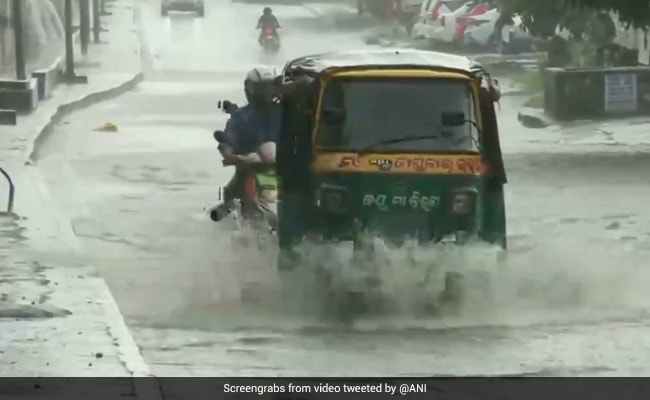 Almost all rivers across Odisha are in spate owing to torrential rain earlier this week, but the state government on Friday rejected the possibility of flood for now.

It has, however, put several districts on alert in the wake of an IMD forecast of another spell of heavy showers in the next two days due to the likely formation of a new low-pressure system over the Bay of Bengal.

The weather system is set to form over the north Bay of Bengal during the next 24 hours under the influence of a cyclonic circulation, which lies over west Myanmar, the Bhubaneswar Meteorological Centre said.

It is expected to become more marked during the subsequent 24 hours and move northwestwards, bringing rain to Odisha and Bengal, according to a bulletin.

Odisha's Engineer-in-Chief, Water Resources Department, BK Mishra, said although all rivers are swelling, there is no such immediate flood threat.

"Except Jalaka River in Balasore district, all rivers are flowing below the danger level," Mishra said, explaining that water inflow into Hirakud reservoir has declined due to comparatively less rainfall in upper catchment areas.

The water level at Jalaka river was flowing at least 0.7m above the danger level, officials said.

They also claimed that water from Jalaka may enter at least 12 gram panchayats of Bhograi block if the current situation persists.

Stating that the administration has been instructed to keep a close watch on the vulnerable river embankments, Mishra said that at least 20 of the 98 sluice gates of Hirakud reservoir have been opened.

At 3 pm, water stood at 616 feet in the reservoir, just 14 feet less than the maximum level.

Announcements were being made on microphones in areas adjoining the dam, asking people to keep evacuation plans ready, District Collector Ananya Das said, adding that the situation was currently under control.

Official sources said that the Baitarani river is also flowing near the danger mark of 17.83 m at Akhuapada in Bhadrak following heavy showers in the upper catchment areas.

Similarly, the Subarnarekha river is also in spate.

The Regional Meteorological Centre, Bhubaneswar, underlined that swollen rivers such as Bansadhara, Rushikulya and Nagabali may overflow if rains continue uninterrupted.

In Keonjhar, two gates of the Hadagada reservoir on the Salandi river, a tributary of the Baitarani, have been opened.

During the day, heavy rain occurred at some places in Sundargarh, Deogarh, Sambalpur, and Kendrapara over a 24-period till 8.30 am on Friday, the Met said.

Tensa in Sundargarh and Barkot in Deogarh received 113 mm of precipitation, followed by 90 mm at Kuchinda in Sambalpur.

Odisha is already reeling from the effects of torrential rain, caused due to a depression. It led to flooding of villages and low-lying areas across many districts, the collapse of several bridges over swollen rivers, and landslides disrupting road connectivity.

It warned of extremely heavy precipitation at a few places in Kalahandi, Bolangir, Nuapada, and Nabarangpur on Sunday, besides heavy to very heavy showers across the state.

According to the weatherman, widespread rain with isolated heavy downpour is also expected in sub-Himalayan West Bengal on Saturday and Sunday and in Gangetic Bengal on Sunday.

The coastal districts of South 24 Parganas and Purba Medinipur, Paschim Medinipur, and Jhargram are likely to receive heavy rainfall, while in the north, Darjeeling, Jalpaiguri, and Alipurduar may receive downpour, the Met office stated.

Fisherfolk have been advised not to venture into the sea off the coast till Monday as squally weather with a wind speed of 45-65 kmph is expected over the west-central Bay of Bengal.