Lucknow: Uttar Pradesh BJP lawmaker Kuldeep Singh Sengar was today charged with the rape of a 16-year-old who had tried to kill herself in front of Chief Minister Yogi Adityanath's home on Sunday after months of trying to get the police to act on her complaint.

"The government doesn't want to save anyone," asserted UP police chief OP Singh, referring to the accused politician as a "mananiya vidhayak (respected legislator)".

The teen from Unnao, a district around 50 km from Lucknow, has accused the legislator of raping her in June last year. Though the lawmaker has been charged under a tough law for sexual crimes against children, he will not be arrested just yet. "Why should we arrest him? We have mentioned his name in the FIR (First Information Report). Now CBI can take over the investigation," said the police chief.

State Home Secretary Arvind Kumar added, "The charges against the vidhayak-ji will be investigated. If there is any merit in them, then action will be taken." 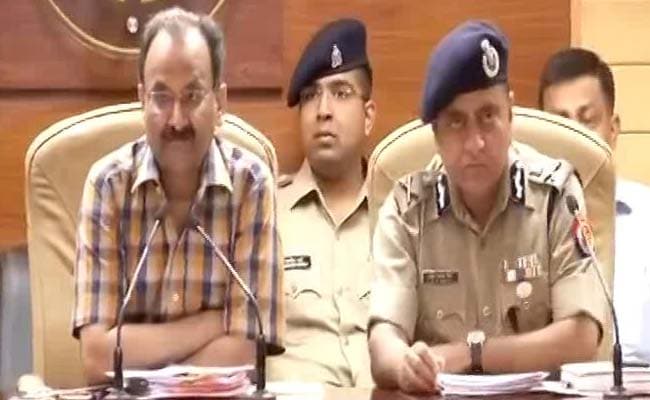 Unnao rape case: UP police held a press conference to explain its handling of the incident

The state government repeated these comments before the Allahabad High Court which, on a petition, asked when the lawmaker would be arrested.

All this week, Kuldeep Singh Sengar has strutted around denying the accusation, disparaging the girl and her family and hitting out at the media. During that time, his brother Atul Singh was arrested for a brutal assault on the girl's father, who was not just arrested with severe wounds on his body but who died on Monday in custody. He "had not been treated properly", a Special Investigation Team has found.

The teen and her family have been put up in a hotel near their village with guards, for protection, by the administration.

Last night, Sengar made a dramatic appearance outside the house of the police chief in Lucknow, in a convoy of 20 vehicles. "I have come here because TV channels were saying I will surrender," he appeared to taunt reporters, insisting that he was neither a fugitive nor a rapist.

As the late night drama reinforced outrage at the ruling party lawmaker's brazenness, the Yogi Adityanath government ordered the police to file a case against Sengar and hand over all cases related to it to the CBI.

The Special Investigation Team is learnt to have come across circumstantial evidence that appears to support some of the allegations levelled by the girl's family.

Promoted
Listen to the latest songs, only on JioSaavn.com
The police said a case of rape was not filed earlier because of discrepancies in the statement of the girl.

"The victim said she was scared therefore didn't mention rape in her first complaint...The SIT (Special Investigation Team) took this into consideration and then registered the complaint against the legislator," said OP Singh.