According to Nihang leaders, the decision to "not leave" the protest site was taken in a Mahapanchayat of the religious order held on Wednesday after public support from across the country. 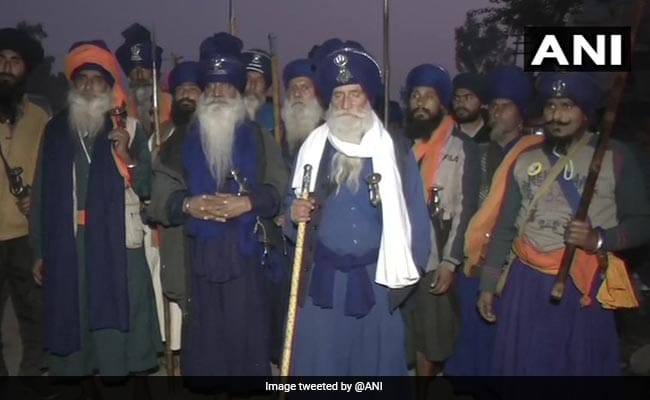 We are unlikely to leave the Singhu border, said a Nihang member. (FILE)

Members of the Sikhs' Nihang order, who are camping at Singhu on the Delhi-Haryana border in support of farmers protesting the three central agricultural laws, have decided to "stay put" and "strengthen" the agitation, Nihang leaders said on Thursday.

According to Nihang leaders, the decision to "not leave" the protest site was taken in a Mahapanchayat of the religious order held on Wednesday after public support from across the country.

"We will stay put here. We are here to support farmers and will keep on strengthening the agitation. Based on public support, we have decided not to leave Singhu Border. We will remain here till the movement is going on," said Jatthedar Raja Raj Singh, a Nihang leader.

The decision was announced at a press conference on Thursday at Singhu Border.

The development comes after the Samyukta Kisan Morcha, an umbrella body of 40 farmer unions spearheading the protests against the farm laws, had reportedly asked the Nihangs to leave the agitation site following the lynching of a Dalit labourer for allegedly desecrating a Sikh holy book.

Mr Singh said that after the lynching, Sikh's Nihang order had sought a public opinion if they should stay put or leave the protest site.

"We have got support not only from the people of Punjab but from across the country. Through phones and other mediums they conveyed us that we should not leave the protest site. So we decided to stay," Mr Singh said.

The body of the labourer, Lakhbir Singh, 35, from Punjab's Taran Taran district, with a hand chopped off was found tied to an overturned police barricade at the farmers' protest site at the Singhu border on October 15.

Two members of the Nihang order were arrested and two more "surrendered" before Sonipat Police in connection with the lynching incident even as the victim's family questioned the attackers' claim that he committed sacrilege and demanded a high-level probe.

Nihangs also demanded "life imprisonment" or "death sentence" for anyone who desecrate holy books or texts or any religion.

"We appeal and demand the central and state governments to make a separate law to deal with persons who desecrate holy books and texts or disrespect gods, saints. Such people should be given life imprisonment or death sentence so that we don''t have to act," Nihang leader Jatthedar Raja Raj Singh said.