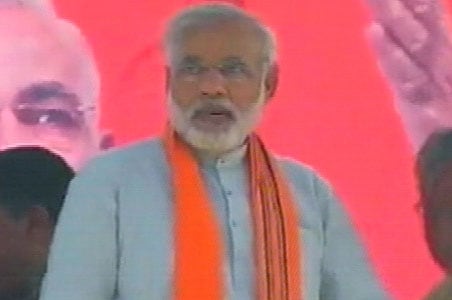 New Delhi: Striking an aggressive posture, Gujarat Chief Minister Narendra Modi on Saturday rejected the amendments suggested by the Centre to GUJCOCA, saying it would amount to taking away the "teeth and nails" of the legislation.

"The amendments suggested by the Centre amount to taking away the teeth and nails of the Gujarat Control of Organised Crime Act (GUJCOCA)," he told reporters on the sidelines of the BJP National Executive meeting.

Modi said if necessary, the Gujarat government would take the GUCOCA Bill back to state assembly. He said Bill was passed by the assembly on the basis of guidelines from the Centre to combat organised crime.

The Union Cabinet on Friday returned the controversial GUJCOCA Bill passed by the Gujarat Assembly to the state, saying that without three key amendments it could not be sent for Presidential assent.

One of the amendments being suggested to the state government is that the provision that confession before a police officer will be admissible should be dropped.

Modi criticised the UPA government for "failing" to take a decision on the bill in its entire five-year term.

Promoted
Listen to the latest songs, only on JioSaavn.com
He contended that the GUJCOCA was a "Xerox copy" of the Maharashtra Control of Organised Crime Act, which has been in force in the western state.