Rebel Madhya Pradesh Congress MLAs encamped at a five-star hotel in Bengaluru have released videos saying they had been "trying to talk (to senior party leaders for one year" but did not wish to anymore. The MLAs, whose resignations last week have left the state's Congress government near collapse, countered party claims they had been abducted and forced to resign, saying they had chosen to leave the party of their own will and were not interested in talking with their former colleagues.

Twenty-one videos were released this morning following Madhya Pradesh senior Congress leader Digvijaya Singh's dramatic protest outside the hotel. Mr Singh, who was protesting outside the Ramada Hotel in the Karnataka capital, was dragged away by police and taken into preventive custody.

"We have come to know through some people that some Madhya Pradesh Congress leaders, like Digvijaya Singh-ji, came to see us. We do not wish to see or talk to anyone. We have been trying to talk for one year and for one year nobody has listened to us. In one day what will they listen?" Aidal Singh Kansana, the MLA from Sumwali in Madhya Pradesh's Morena district said.

"We have come to Bengaluru of our own will and will leave the same way. It has been said that Congress leaders and ministers came to see us today. We left because the government in power was not doing any work for the people. We are here because we are disappointed by the government in power," Kamlesh Jatav, the MLA from Ambah in Morena district, said.

Meanwhile, some MLAs pointedly targeted Mr Singh, naming him as the reason they had fled and appealed to the police for help.

"We left, we ran way, because of Digvijaya Singh. Leaders like him ruined the Congress. I appeal to Bengaluru Police for protection. We don't want to meet Digvijaya Singh," Imarti Devi, who was sacked as Minister of Women and Child Development following her rebellion, said. 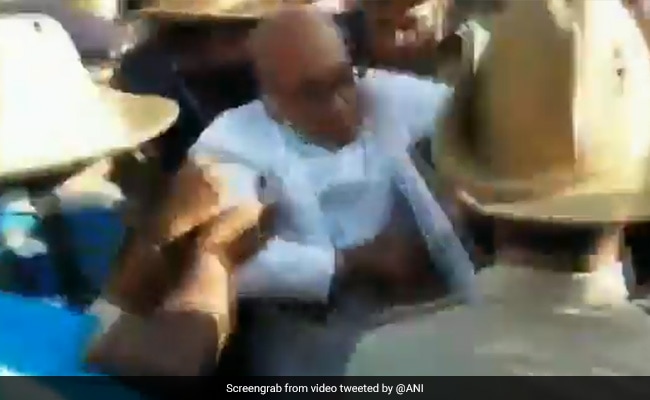 Mr Singh, who led an earlier "rescue" operation after some MLAs were taken to a resort in Gurgaon near Delhi, was in the thick of the action today too, accompanied by Karnataka Congress chief DK Shivakumar; Mr Shivakumar led a similar action last year after Congress-JDS MLAs resigned and holed up in a hotel in then-BJP-ruled Maharashtra.

"We were expecting them to come back, but when we saw they're being held back, messages came from families. I spoke to five MLAs. They said they're captive and that their phones have been snatched away," Mr Singh said.

"They're being followed 24/7," he added, claiming that some had told him they were being held against their will. Mr Singh also denied the MLAs had refused to meet him and alleged rebel lawmakers had been "sponsored" by the BJP.

The Congress has moved the Supreme Court to release its lawmakers from "BJP captivity".

Twenty-two MLAs submitted letters of resignation to Madhya Pradesh Speaker NP Prajapati earlier this month. The resignations, some of which have yet to be accepted by the Speaker, have left Chief Minister Kamal Nath's government on the back foot as the BJP looks to force an immediate floor test.

The majority mark in the Assembly is now 112 after six MLAs' resignation was accepted on Saturday. The BJP has 107 seats and the Congress has 108, including the 16 whose resignations have yet to be accepted.

The BJP has gone to the Supreme Court asking for an immediate floor test. The governor, Lalji Tandon, has twice asked Chief Minister Kamal Nath to prove his majority but the Congress accuses him of "pre-determining" that the party is already in a minority.

India Sends 6 Tons Of Medical Assistance To Afghanistan After Earthquake