"They Are Being Followed 24/7": Digvijaya Singh On Madhya Pradesh Rebels

Madhya Pradesh Crisis: "We were expecting them to come back, but when we saw they're being held back..., messages came from their families," Digvijaya Singh told reporters, explaining his sudden visit and his attempt to meet the rebels. 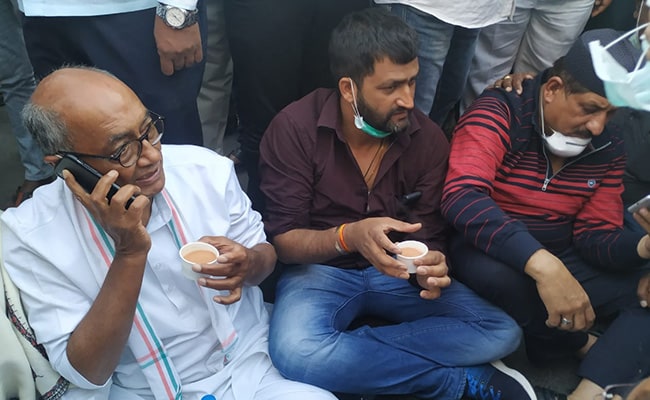 Congress leader Digvijaya Singh arrived in the early hours of Wednesday morning at the five-star hotel in Bengaluru where 22 rebel Madhya Pradesh MLAs of his party have been staying for over a week. Along with the party's Karnataka troubleshooter DK Shivakumar and other leaders, Digvijaya Singh tried to enter the Ramada Hotel but was stopped by the police and eventually, dragged away.

The resignation of MLAs loyal to former Congress leader Jyotiraditya Scindia, who quit last week and joined the BJP, has endangered the Congress government of Kamal Nath in Madhya Pradesh. The Congress insists that the MLAs are being held captive in Bengaluru in BJP-ruled Karnataka, even though many of them have been regularly posting videos saying they came of their own volition. They have also asked for protection to go to Madhya Pradesh and confirm their resignation in person, as asked by the Speaker.

"We were expecting them to come back, but when we saw they're being held back..., messages came from their families," Digvijaya Singh told reporters, explaining his sudden visit and his attempt to meet the rebels.

He claimed that a few of them had told him they were in Bengaluru against their will.

"I personally spoke to five MLAs; they said they are captive, their phones were snatched away and there is police in front of every room. They're being followed 24/7," said the former Madhya Pradesh chief minister.

At the same time, he also alleged that the rebels were "all sponsored" and were posting videos attacking the Congress because of the BJP.

"I'm not alleging that the BJP bought them. Some of our MLAs showed audio and video clips of money being offered to those who didn't join them," Mr Singh alleged.

He also denied that any MLA had refused to meet him this morning, when he was stopped by the police and launched a sit-in right outside the Bengaluru hotel.

We have been taken to the local DCP office by Bengaluru police.

I demand that we must be allowed to meet our MLAs , who are in BJP's captivity.

I announce my Hunger Strike, till we are allowed to meet our MLAs.

We live in Democracy, not Dictatorship.

The 15-month-old Congress government in Madhya Pradesh will collapse if the MLAs stand by their resignation.

After the speaker accepted the resignation of six Congress MLAs on Saturday, the party now has 108 legislators. These include 16 of the rebels in Bengaluru.

The BJP has 107 seats in the Madhya Pradesh assembly, which now has an effective strength of 222. The majority mark is 112.

The BJP has gone to the Supreme Court asking for an immediate floor test. The governor, Lalji Tandon, has twice asked Chief Minister Kamal Nath to prove his majority but the Congress accuses him of "pre-determining" that the party is already in a minority.