"Brought Corrupt To Jail Door, 5 More Years And They Will Be In": PM 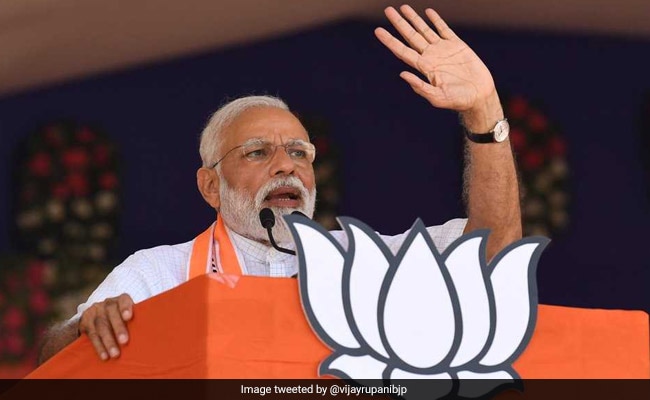 Prime Minister Narendra Modi today said he would ensure that the corrupt are put behind bars if the National Democratic Alliance government was voted to power again. Taking a dig at the Congress manifesto that PM Modi claims focuses more on bailing out criminals than jailing them, the Prime Minister at a rally in Gujarat's Junagarh said, "In the last five years, I have brought them to the doors of jail and if you give me next five years, they will be inside."

PM Modi said the Congress is known by "many names as far as scams are concerned".

"Now it has got a new name, but with proof. The Congress is indulging in a Tughlaq Road chunavi ghotala (election scam), where money meant for the poor is being usurped for their own leaders," the Prime Minister said, drawing loud applause from the crowds under the blazing sun. Congress chief Rahul Gandhi's official residence is on Tughlak Lane in Lutyens' Delhi. Madhya Pradesh Chief Minister Kamal Nath's residence as a parliamentarian is at 1, Tughlaq Road.

The opposition has accused the Modi government of trying to weaken them with launching income tax raids in election season. Income tax officers have searched the premises of people linked to Congress leaders in Karnataka and Madhya Pradesh in the last one month.

PM Modi said Madhya Pradesh has become a "Congress ATM" after Karnataka. "The situation in Rajasthan and Chhattisgarh is no different. Congress is only interested in coming to power to loot people," he said, according to news agency PTI.

The tax department has denied the raids were politically motivated and asked leaders to refrain from making baseless comments.

Businessman Robert Vadra, husband of Congress leader Priyanka Gandhi Vadra, is under investigation for alleged wrongdoings in property deals. He has maintained that the probe is politically motivated.

The Prime Minister also held the Congress responsible for the situation that Kashmir is in today. "Only one song keeps playing in Congress's tape recorder - remove Modi, remove Modi. This is the same Congress that Sardar Vallabhbhai Patel had nurtured," he said. "Had he (Sardar Patel) not been there, India would not have even got Kashmir."

"Sardar Patel gave a lot of effort and made Junagarh a part of this great nation, but the Congress is today bent on destroying the legacy of Sardar Patel and hopes of Indians. History is a testimony to what the Congress did with Sardar Patel; the Congress erased Sardar Patel's contributions. If not for Sardar Patel, where would Junagarh be today; if not for him, what would have been the future of Somnath (temple)?" PM Modi said.

Gujarat will vote on April 23 in the third of the seven-phase national elections. Results will be out on May 23.