The hoardings, praising Navjot Singh Sidhu and Imran Khan as real heroes of the Kartarpur corridor project, had been put up in the city by former cricketer's staunch supporter and municipal Councillor Harpal Singh Verka. 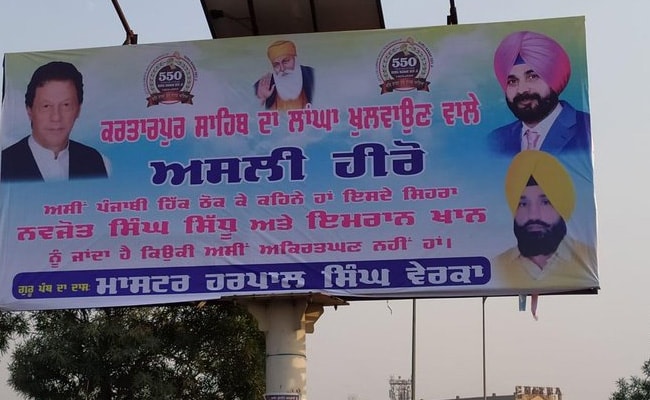 Hoardings praising Imran Khan and Navjot Singh Sidhu come up in Amritsar, then brought down.

Several hoardings that surfaced in Punjab's holy city Amritsar, describing Congress leader Navjot Singh Sidhu and Pakistan Prime Minister Imran Khan as "real heroes" for turning the Kartarpur Corridor project into a reality, were brought down hurriedly on Wednesday by some unknown persons and municipal workers.

The hoardings, which surfaced on Tuesday, credited the cricketer-turned-politicians for making the project, giving Sikh devotees an easy access to the Kartarpur Sahib Gurdwara across the border in Pakistan, a reality.

The hoardings, carrying Mr Sidhu's picture alongside Mr Khan, read in Gurmukhi, "Sidhu and Imran Khan are the real heroes for making the Kartarpur corridor project a reality... the credit goes to them."
A day later, however, some unknown people along with Amritsar Municipal Corporation workers removed all the banners.

The hoardings, praising Mr Sidhu and Mr Khan as real heroes of the corridor project, had been put up in the city by former cricketer's staunch supporter and municipal Councillor Harpal Singh Verka, whose picture too was also on them.

Mr Verka said he put up hoardings at various prominent locations including Ranjit Avenue, Mall Road and Amritsar East Assembly constituency, from where Mr Sidhu is an MLA. He said Pakistan's Prime Minister Imran Khan had extended the invitation to his friend Navjot Singh Sidhu during the former's swearing-in ceremony in Pakistan earlier, when Mr Sidhu suggested Mr Khan to open the  Kartarpur Sahib corridor for Sikh devotees.

"I have put up numerous hoardings as I wished to send out the message to the people about Mr Sidhu's role in getting the corridor opened," he said.

Mr Verka added Mr Sidhu was the first Indian politician who received the invitation from Imran Khan two days ago to attend the corridor's opening ceremony.

Mr Sidhu had drawn the flak for hugging Pakistan's army chief during his Islamabad visit last year.
He, however, had defended his act of hugging General Qamar Javed Bajwa at the swearing-in ceremony of the Pakistan prime minister as his emotional response on learning that Sikh pilgrims may now be allowed to visit the Kartarpur shrine across the border.

Mr Sidhu was slammed by the opposition Bharatiya Janata Party and the Akali Dal in Punjab, and was criticised even by Punjab Chief Minister Amarinder Singh for hugging the General at Imran Khan's swearing-in ceremony.