"If They Vote Against...": DK Shivakumar On Karnataka Crisis, Floor Test

If the rebel lawmakers' resignations are accepted, the coalition strength drops from 118 to 100 and will bring the majority mark in the assembly from 113 to 105. The BJP has 107, with the support of two independents, will emerge as the majority alliance 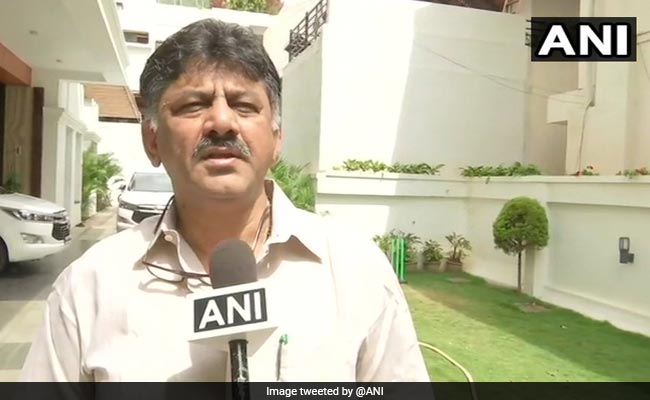 Karnataka minister DK Shivakumar, who last week went to Mumbai to convince the rebel lawmakers to return, today expressed confidence his colleagues would "come back and save the government". However, the party strongman also had a word of warning for those who continued to align themselves against the Congress.

"I have confidence in all our MLAs. They have been elected from Congress and they have been there for a long period. They have fought like tigers in their domain. I think some good gesture will prevail," the Congress' Mr Fixit told news agency ANI.

Mr Shivakumar's comment comes after Chief Minister HD Kumaraswamy declared he would seek a trust vote and asked the Speaker to "fix a time".

The Karnataka coalition crisis has seen, so far, seen the resignation of 16 legislators and two independents. If these are accepted, the coalition strength drops from 118 to 100 and will bring the majority mark in the assembly from 113 to 105. The BJP has 107, with the support of the two independents, will emerge as the majority alliance.

DK Shivakumar, who has led the Congress' fight for survival in Karnataka, travelled to Mumbai last week to meet rebels holed up in a five-star hotel. Mr Shivakumar camped outside, drinking coffee and eating momos after being stopped from entering by Mumbai Police, and was then "escorted" to the airport.

His work as a negotiator led to a small win yesterday, with Congress leader MTB Nagaraj announcing he would withdraw his resignation. Today, however, MTB Nagaraj left for Mumbai with BJP leader BS Yeddyurappa's aide in tow.

None of the resignations have so far been accepted by Karnataka Speaker Ramesh Kumar. The Supreme Court, approached by a group of 10 of the rebels, directed yesterday that status quo remain till it rules on constitutional matters on July 16.

"There may be some issues. Congress party is going to sit down with them and settle their demands. We have an open mind. We don't want to rob them. After all, in family it all happens," he said, adding he was getting "signals" at least some of the rebelling legislators would return to "save the government".

Karnataka BJP chief BS Yeddyurappa has demanded the Chief Minister and his government resign because he does not have a majority in the assembly. "I demand that the Chief Minister, if he is honest and cares for the democratic system, he should immediately resign," he said.

In preparation for the test of strength, the Congress and JDS, as well as the BJP, have ferried their lawmakers from one five-star hotel and resort to another, to stop "poaching" attempts.