Momos From 5-Star Hotel That Has Blocked Congress's DK Shivakumar

Karnataka Crisis: DK Shivakumar, determined to persuade the rebels to return to the fold, drove straight from the Mumbai airport to the hotel this morning 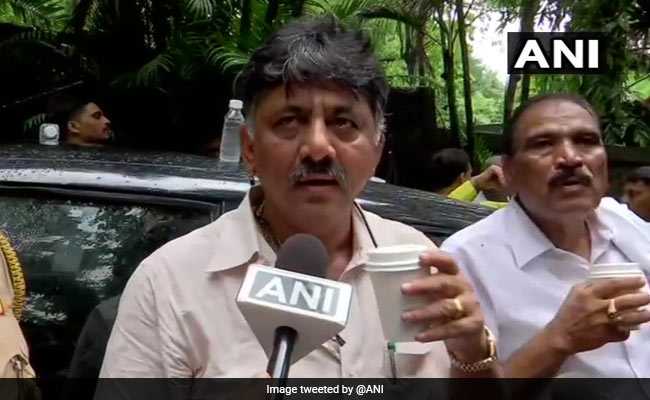 DK Shivakumar, Karnataka Congress leader, has not been allowed to enter a five-star hotel in Mumbai where rebel lawmakers who have endangered his government's future are staying. That did not mean he could not have food from the hotel.

Mr Shivakumar, determined to persuade the rebels to return to the fold, drove straight from the Mumbai airport to the hotel this morning, and came up against a blockage of Mumbai policemen.

Scores of policemen had been guarding the hotel entrance since last night, when the Karnataka rebels wrote to the Mumbai police chief asking for protection from Mr Shivakumar and Karnataka Chief Minister HD Kumaraswamy.

Four hours into his hotel stake-out, Mr Shivakumar was handed a plate of momos that someone had helpfully got for him from the Renaissance hotel.

Mr Shivakumar was seen tucking into the momos, though he would give anything to enter the hotel himself and meet the dissidents, who have refused to see him.

Earlier, he had told a senior police officer blocking his path that he wanted to have coffee with his "friends" and relax, that he had booked a room in the hotel.

"We can get you coffee," the police officer replied smoothly. Mr Shivakumar was soon seen sipping coffee from a paper cup.

Soon, the hotel cancelled the booking.

He refused to move when it started raining, and was offered an umbrella by the police.

"I'll not go without meeting my friends. They'll call me. Their heart will break. I'm in touch already, hearts of both of us are beating," Mr Shivakumar said.

The rebels did not return the warmth. "We are not interested in meeting him," said rebel Congress lawmaker Ramesh Jarkiholi.

"We don't intend to insult DK Shivakumar. We've faith in him but there is a reason we have taken this step. Friendship, love and affection are on one side, with gratitude and respect we request him to understand why we cannot meet him today," said another Congress dissident, B Basavaraj, on a softer note.

Mr Shivakumar, a Karnataka politician known for his negotiation skills, found himself quite alone in his endeavours in Mumbai. Senior Congress leaders in Mumbai were MIA; only a few youth Congress workers showed up four hours into the stand-off.