Karnataka Political Crisis: Amid slogans of "go back" from protesters hanging off the gates of the Renaissance hotel, DK Shivakumar, who drove straight to the hotel from the Mumbai airport, refused to take the hint.

DK Shivakumar, the Congress's Mr Fixit in every crisis, found himself up against a seemingly impenetrable wall of policemen as he tried every possible ruse in his book to enter a five-star hotel in Mumbai where a group of rebel Karnataka lawmakers threatening the coalition's stability are staying.

The rebels had written to the Mumbai police last night seeking protection from DK Shivakumar as well as their Chief Minister HD Kumaraswamy. Don't allow them to enter the hotel, they wrote.

Amid slogans of "Go back" from protesters hanging off the gates of the Renaissance hotel, DK Shivakumar, who drove straight to the hotel from the Mumbai airport, refused to take the hint.

"This DK Shivakumar is not afraid of slogans. I have come alone, I will die alone," he declared. He insisted that he had a room in the hotel, flashing a booking receipt on his phone. The hotel soon cancelled the booking, citing an "emergency". 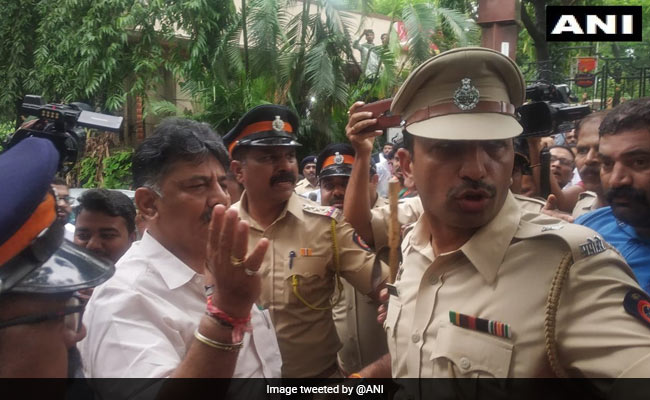 A senior Mumbai police officer, stopping Mr Shivakumar from entering the hotel, said: "Sir, (the rebel lawmakers) have said they are frightened of you, we can't allow you to enter unless they want us to."

Mr Shivakumar said he was ready to wait outside the hotel all day. "I'll not go without meeting my friends. They'll call me. Their heart will break. I'm in touch already, hearts of both of us are beating," he told reporters, unruffled by all signs to the contrary.

"My friends are staying here. They are brothers. There is a problem in the family. There is no question of threatening anyone. We love each other, respect each other," said the 57-year-old, seen taking shelter under an umbrella as it rained. "How can I be a threat to the MLAs? We are friends... I have a heart, and no weapons," he said.

Mr Shivakumar, 57, is used to cajoling dissidents or bringing critics on board but he has rarely found himself in such a spot. Over the past year, he has kept the shaky Congress-Janata Dal coalition in Karnataka running despite periodic revolt and infighting.

Mr Shivakumar's efforts enabled the Congress and the JDS to sink their differences and tie up after the BJP emerged as the largest party in the Karnataka polls last year but fell just short of a majority.

He managed to keep the flock together, accusing the BJP of not giving up on its attempts to get rival lawmakers to cross over.

He ferried busloads of lawmakers in and out of Bengaluru, even dragging a runaway Congress leader away from waiting BJP leaders.