Karnataka political crisis: If the resignations are accepted, the coalition's 118 members will come down to 100 and the majority mark will drop from 113 to 105

Five more rebel lawmakers of the Congress-JDS coalition in Karnataka have approached the Supreme Court against the assembly Speaker for not accepting their resignations. The lawmakers are K Sudhakar, Roshan Baig, MTB Nagaraj, Muniratna Naidu and Anand Singh.

Including these five, the total number of lawmakers who approached the Supreme Court is now 15.

Their move comes on a day when there is a relative lull in political activity in Karnataka this weekend with most lawmakers from the ruling coalition - and also those of the opposition BJP - spending time in resorts and hotels in Bengaluru and Maharashtra, tucked away from poaching by each other's parties.

After Friday's order from the Supreme Court that it should be status quo on the resignation or disqualification of 10 rebel coalition legislators - and the five who approached the top court today - the next major political step is expected only early next week. The Speaker, KR Ramesh Kumar, is also likely to take a call on those resignations by then.

Chief Minister HD Kumaraswamy of the JDS has asked the Speaker to allow him to prove his government's majority on the floor of the house - and Wednesday is the likely day for that, after the Supreme Court hears the matter of the resignations on Tuesday.

If the resignations are not accepted, the lawmakers face disqualification as their parties had issued an order to be present on Friday on the first day of the legislature session. The lawmakers had instead returned to Mumbai after resubmitting their resignations to the Speaker on Thursday evening. 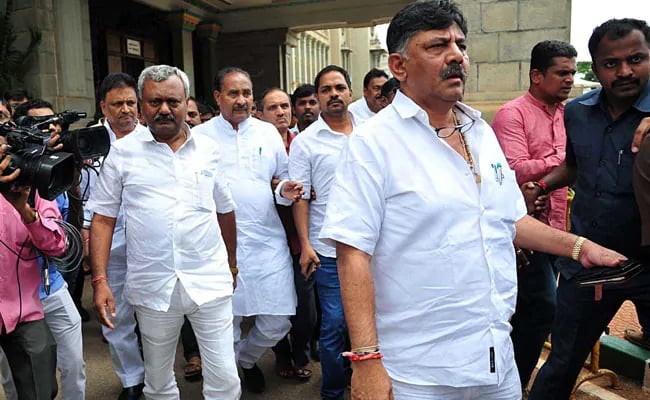 The status of those lawmakers would make a big difference to the position of the Karnataka government.

On Sunday, the rebel lawmakers in Maharashtra took time out to visit temples.

But while matters may not be as dramatic as the last few days, which saw Congress troubleshooter DK Shivakumar camping outside the Mumbai hotel where the dissidents are staying, hectic backroom manoeuvring is going on.

Mr Shivakumar has been doing the rounds of the homes of dissidents, persuading them to change their minds. Other Congress leaders have also been reaching out to lawmakers like former home minister Ramalinga Reddy.

MTB Nagaraj, who resigned along with K Sudhakar on Wednesday, seems to have softened his stand. "The situation was such that we submitted our resignations, but now DK Shivakumar and others came and requested us to withdraw resignations. I will speak to Sudhakar Rao and then see what is to be done, after all I have spent decades in Congress," Mr Nagaraj was quoted as saying by news agency ANI.

Mr Sudhakar told NDTV on Wednesday, after meeting the Governor, that former chief minister Siddaramaiah asked him to reconsider his resignation. "I have asked him to give me some time," Mr Sudhakar had said.

If the resignations are accepted, the coalition's 118 members will come down to 100 and the majority mark will drop from 113 to 105. The BJP has 105 members and the support of the two Independents, which takes its tally to 107.