Karnataka Congress Lawmaker To Withdraw Resignation, On One Condition

Congress legislator MTB Nagaraj, one of the 16 coalition legislators who had resigned from the state assembly, putting in danger the state government, has said that he would try to convince another rebel Sudhakar Rao to take back his resignation. 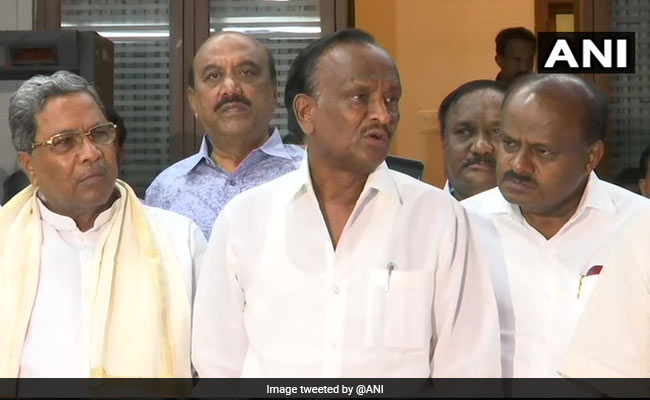 After days of turmoil, the Congress-JDS government in Karnataka celebrated a small victory with a rebel lawmaker announcing that he was withdrawing his resignation. Congress legislator MTB Nagaraj, one of the 16 coalition legislators who had resigned from the state assembly, agreed to come back to the coalition fold after being coaxed by Congress leader Siddaramaiah and Chief Minister HD Kumaraswamy. He later put a condition to his return-- another rebel Sudhakar Rao will have to withdraw his resignation as well.

"I and Sudhakar had given resignation from the MLA's post. All the leaders are asking me to stay in the Congress since morning. I have decided to stay in the party," he said after meeting Congress leader Siddaramaiah and Chief Minister HD Kumaraswamy.

"We will try to convince Sudhakar and both of us will take our resignations back," he was quoted by news agency ANI as saying.

The lawmaker from Karnataka's Hoskote constituency had also said that he would try to convince the other rebels to return to the party fold.

Mr Nagaraj withdrawing his resignation would not dramatically help the coalition's situation in the state as the other rebel legislators are still standing their ground.

If Karnataka Assembly Speaker Ramesh Kumar accepts their resignations, the coalition would still be short of a simple majority.

Hearing the petition of 10 rebel lawmakers, the Supreme Court on Friday ordered the Speaker to maintain a status quo regarding the resignations till Tuesday.

Amid questions about the Karnataka coalition's survival, Chief Minister HD Kumaraswamy declared on Friday that he would seek a trust vote on the floor of the house and asked the Speaker to "fix a time". In preparation for the test of strength, ruling allies Congress and Janata Dal Secular and rival BJP have arranged to move their lawmakers to resorts to sequester them from "poaching" attempts.