If Enemy Attacks, India Will Give "Befitting Response": Rajnath Singh

Defence Minister Rajnath Singh said India is a peace loving country but "we are ready to take any big step that is required to defend its national unity and sovereignty". 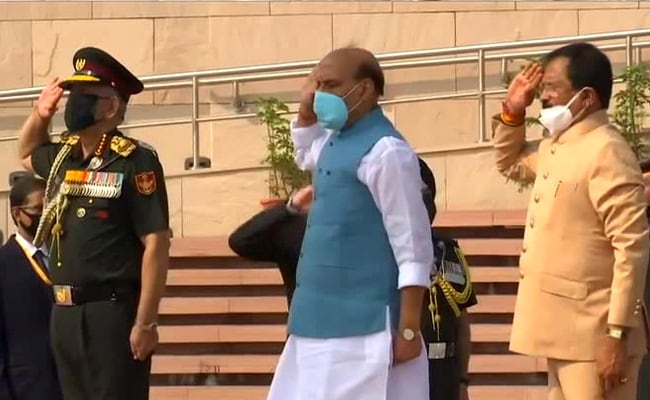 Defence Minister Rajnath Singh today said if an enemy attacks India, it will give a befitting response as shown in Kargil. He made the remarks on the 21st anniversary of the country's victory over Pakistan in the Kargil War.

He also said India is a peace loving country but "we are ready to take any big step that is required to defend its national unity and sovereignty".

After paying tributes at the National War Memorial, he said: "I congratulate all Indian citizens on the occasion of Kargil Vijay Diwas. The sacrifices made by soldiers, which helped us win the Kargil War, will always be a source of inspiration for the armed forces."

On July 26, 1999, the Indian Army had announced the successful culmination of "Operation Vijay", declaring victory after the nearly three-month-long battles in the icy heights of Kargil. The country lost more than 500 soldiers in the war.

Later during the day, Rajnath Singh said on Twitter that Kargil Vijay Diwas is a celebration of courage and valour of the Indian armed forces who fought the enemy under the most challenging conditions that the world had witnessed in recent history.

"Kargil is not only a symbol of national pride but also a big step that was taken against injustice. I would like to mention the views of the then Prime Minister Atal Bihari Vajpayee on national security. He said we have proved we will not bow down in front of any external pressures," he said.

"He (Vajpayee) said we have also proved we are a responsible country. Whatever steps we take with respect to national security, it is always in self-defense and not to attack anyone. If an enemy attacks our country, then we have proven we will give it a befitting response as shown in Kargil. Friends, this sentiment today is as strong as it was 21 years ago," he added.

On this day, we urge the countrymen to follow the same principles of duty and integrity like our soldiers, the minister said.

"If our soldiers are keeping this country safe at the borders, then it is our responsibility for the unity, diversity and brotherhood of our country. If we maintain peace and brotherhood among ourselves and we keep moving forward on this path of development, then this would be the biggest tribute to our brave soldiers," he said.

Mr Singh said he recently got the opportunity to visit Leh, Ladakh and pay respects to the brave men.

"I observed that despite the unfavourable and tough conditions, our brave soldiers had kept their patience and gave befitting reply to the enemies," the minister said.

The Kargil War was declared over on July 26, 1999, after Indian soldiers pushed back the Pakistani troops, a bulk of them drawn from the neighbouring country's Northern Light Infantry, from the captured peaks. The day is observed as "Kargil Vijay Diwas" to commemorate India's victory in the war.