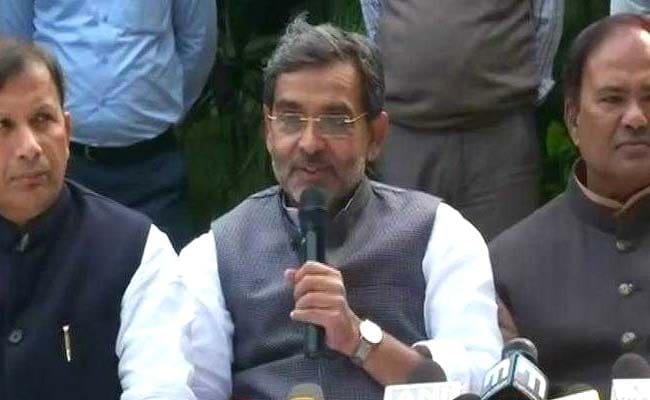 In a democracy, it is always the public interest that wins, Upendra Kushwaha tweeted.

Praising the assembly poll results, leaders across the political spectrum in Bihar on Tuesday took a swipe at the BJP, which suffered a drubbing in two of its bastions and was engaged in a neck-and-neck fight with the Congress in the third state.

The Bharatiya Janata Party witnessed a sharp dip in its vote share in Chhattisgarh and Rajasthan. In Madhya Pradesh, the saffron party and he Congress are taking turns to overtake each other as counting of votes is underway.

In Mizoram and Telangana, the BJP bagged one seat each.

Only "Lord Rama and the public" knew what lay in store for the party which rules at the Centre, Rashtriya Janata Dal national president Lalu Yadav said.

The former chief minister, who is serving sentences in a number of fodder scam cases and currently lodged at a hospital in Ranchi, congratulated the public on his official twitter handle, which is operated by his close aides.

In a tweet, which bore his trademark style, Mr Yadav said, "This is the public. It knows everything. It is now wise enough to discern jumlas (gimmicks)."

"Madhya Pradesh, Chhattisgarh, Rajasthan... Only Lord Rama knows and the public knows what lay in store. Heartiest congratulations to the justice-loving public," he added.

Rashtriya Lok Samata Party (RLSP) chief Upendra Kushwaha, who resigned from the Union council of ministers and severed ties with the NDA on Monday, also took a veiled dig at the saffron party and congratulated Congress president Rahul Gandhi, under whose leadership the party put up an impressive show in the three states.

"In a democracy, it is always the public interest that wins. Jumlebaazi was bound to get exposed one day. Heartiest congratulations to Rahul Gandhi for the victory," Mr Kushwaha tweeted, tagging the official Congress page and its Rajasthan veteran Ashok Gehlot, among others.

Mr Kushwaha, who has so far kept his cards close to his chest, is expected to side with the opposition alliance comprising the RJD and the Congress. He had put in his papers alleging that he felt "betrayed" and "dejected" under Prime Minister Narendra Modi's leadership.

"Kahin khushi kahin gam... Didn't I warn you about the writing on the wall. And that truth shall prevail. Hard hitting.... and well deserving. Truth has prevailed at last," Mr Sinha tweeted without naming any party.

"Hearty congratulations to all our people on the spectacular, most expected and awaited victory," he said.

"Those who have lost, thanks to their arrogance, poor performance or over ambition - also deserve heartfelt condolences. Hope wish and pray that wisdom and good sense prevails upon them soon... sooner the better. Long live democracy. Jai Hind," the actor-turned-politician said in another tweet.