In Kerala, a Beef-Eating Fest to Protest Against Beef Ban 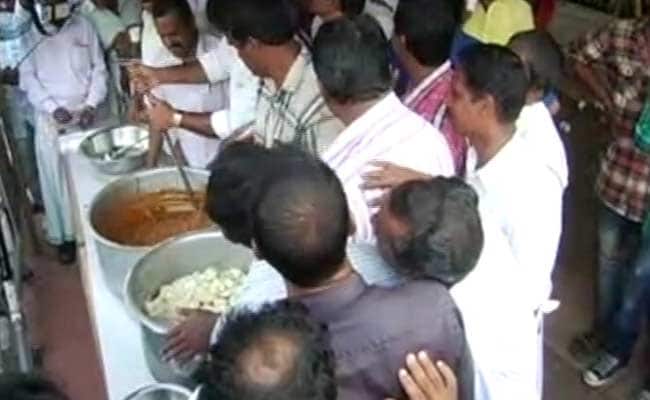 The protest in Thiruvananthapuram against the Maharatshtra beef ban.

Beef cooked in the open and Hindus and Muslims sitting together for a meal - this was how a section of people in Kerala protested today against the recent ban on the meat in Maharashtra.

Beef in Kerala means both cows and buffaloes and its consumption has no religious overtones. Not only do some Hindus here eat beef, going by sales figures, it is also the most-favoured meat in the state.

The annual sale of beef is estimated at 2.3 lakh metric tonnes against the corresponding figure for poultry -- 1.51 lakh metric tonnes.
"I am a Hindu. I should be given the freedom to eat whatever I want, even when I am eating this," said Ajith P from Kannur, who was at the protest of DYFI, the state CPM's youth wing, at Thiruvananthapuram on Tuesday.

Sharing the dish with him was Ajeeth Muhammad. Though a supporter of Muslim League, he said he didn't mind backing a cause. "None of us here have issues with beef consumption. It is part of Kerala's culture. How can we be stopped from eating something we want to?" he said.

Heading the protest, DYFI's B Biju said, "This is a token protest against the ban of beef in Maharashtra and a warning for anyone who would want to implement the same in Kerala. Any ban our food will not be acceptable."

A state panchayat law lays clear guidelines for slaughterhouses - that an animal can't be slaughtered unless it is over 10 years old, or has been made unfit for work or breeding due to injury or deformity.

Digging into the beef curry before returning to the Assembly, CPM legislator P Sreeramakrishnan said, "I eat my beef. And so do many others in Kerala. Nothing will change."

Promoted
Listen to the latest songs, only on JioSaavn.com
Anyone found selling or eating beef can be jailed for five years and fined Rs 10,000. Only the consumption of buffaloes, which give inferior quality beef, will be allowed.

Beef traders - thousands of whom will be jobless - and a section of people in social media have protested against the ban, with hashtag #BeefBan trending for a while on Twitter.