Leader of Opposition Bhupinder Singh Hooda said he and some of his party MLAs were pushed and stopped by the security personnel near the House gates. 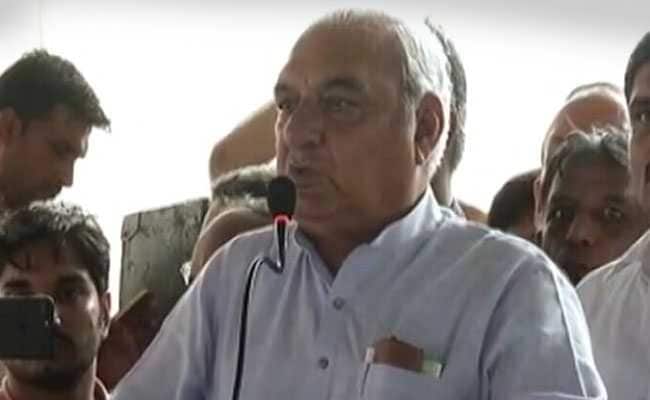 Opposition Congress MLAs on Friday marched to Haryana Assembly to register their protest against alleged paper leak, unemployment, inflation and rising crime graph in the state, during which they alleged that they were pushed around by on-duty security personnel.

Later inside the Assembly, Leader of Opposition Bhupinder Singh Hooda said he and some of his party MLAs were pushed and stopped by the security personnel near the House gates.

After Mr Hooda said that a notice had been given regarding the behaviour of the security staff as it amounted to "breach of privileges" of an elected member, Speaker Gian Chand Gupta agreed to get the matter probed by the Privileges Committee of the House.

On the first day of the brief Monsoon session of the House, Mr Hooda along with his party MLAs marched to travel a distance of nearly one km to reach the Assembly.

The opposition MLAs raised slogans against the BJP-JJP government and some of them were seen carrying placards and balloons with slogans like "Scam ki baat hai, BJP-JJP sarkar hai" and "paper leak ki gold medalist sarkar".

The Congress has alleged that there have been 28 paper leak cases under the BJP-led dispensation in the state, and has demanded a high court-monitored CBI probe in connection with such an incident during the Haryana Police constable recruitment examination held on August 7, which was subsequently cancelled.

"The government does not want the opposition to raise public issues in the House and an attempt was made to stop the marching Congress MLAs by putting up barricades far away from the assembly," he said.

The opposition MLAs have given several adjournment notices and suspension of business proposals to discuss the alleged scams, farmers agitating against the recent central farm laws, youth facing the brunt of unemployment and rising inflation.

"The intention of the government does not seem to be running the assembly as despite the demand of seven days in the Business Advisory Committee meeting (of the assembly), the duration of the Monsoon session has been fixed for only three days. It is clear from this that the government is running away from answering all these issues," Mr Hooda added.