It's television producer, filmmaker Ekta Kapoor's 42nd birthday today. She is the daughter of actor Jeetendra and Shobha Kapoor 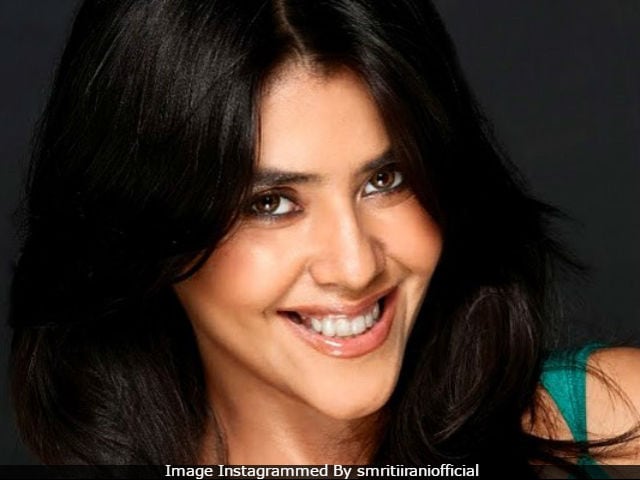 'May you go from strength to strength,' wrote Smriti Irani (Image courtesy: smritiiraniofficial)

Smriti Irani, who is best-remembered to play Tulsi in Ekta's Kyunki Saas Bhi Kabhi Bahu Thi, posted picture of the producer with the caption, "Happy Birthday to a #loving aunt #dedicated #daughter #caring #friend may you go from strength to strength #godbless." Smriti Irani is one of Ekta's closest friends from the industry. She joined politics in 2003 and in 2014, she was inducted in Prime Minister Narendra Modi's union cabinet.

Only once in a while God creates #WonderWomen like you! Heartfelt wishes for love and happiness on your day! #HappyBirthday @ektaravikapoor

A post shared by Divyanka Tripathi Dahiya (@divyankatripathidahiya) on Jun 6, 2017 at 1:43pm PDT

Divyanka's co-star Karan Patel, Raman Bhalla of Yeh Hai Mohabbatein, has to say this about Ekta.

To the woman with magic & stardust happy birthday @ektaravikapoor May you always be enchanted with unrealism & the weave of an unparalleled imagination! Love you much always

Shabbir Ahluwalia, who debuted in the industry with Ekta Kapoor's Kahiin To Hoga, now features as a lead hero in her show Kumkum Bhagya. "Happy Birthday @ektaravikapoor have a blockbuster year! Wishing only the best for you," he posted.

#happybirthday @ektaravikapoor have a blockbuster year ! wishing only the best for you

Film star Shraddha Kapoor, who last starred in Half Girlfriend, also wished Ekta on her birthday. Half Girlfriend was produced by Ekta's Balaji Telefilms.

Happy happy birthday !!! Keep killing it the way you do !!! Love you #EktaKapoorpic.twitter.com/DNaYBPYuJ5

Here's how other celebs wished Ekta.

Happy happy HAPPIEST birthday to my half girlfriend who I fully love ! You are the bestestttttt friend ever I love you to the and @ektaravikapoor !

Wishing the queen of Indian Television Industry @ektaravikapoor a very happy birthday! Have a fabulous year ahead!!! God bless you #respect #love#hardworking #superwoman #strong love you

Meanwhile, a few hours ago, Ekta Kapoor revealed that she has already got her 'best birthday gift.'