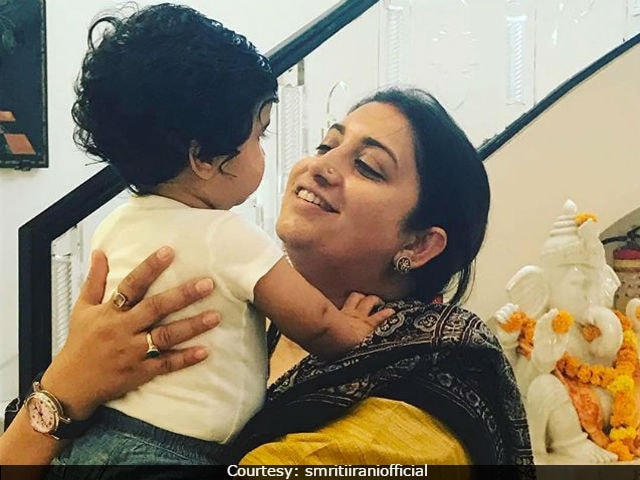 New Delhi: Union Minister Smriti Irani, who shares a good relationship with producer Ekta Kapoor, spent some time with actor Tusshar Kapoor's son. Ekta shared a picture of Smriti Irani and captioned the post as, "Friends like family." Tusshar is Ekta's younger brother. Smriti Irani too shared the post and wrote, "Viva la familia." Lakshya, Tusshar's son was born last year in June via surrogacy. Smriti Irani, who debuted on Instagram few days ago, often keeps us posted about her latest ventures, meetings through the photo-sharing app. Last week, we came to know that Smriti's stepdaughter, Shanelle, was named by actor Shah Rukh Khan. She made her television debut with Ekta Kapoor's Kyun Ki Saas Bhi Kabhi Bahu Thi in 2001. She is known for her character Tulsi Virani.

Smriti Irani received a grand welcome on Instagram from Ekta Kapoor on her debut. Smriti also revealed that Ekta 'pestered' her to join Instagram. "@ektaravikapoor Thanks for pestering me to do this. Looks like a fun journey ahead," she captioned her post along with a picture of herself with Ekta and actress Sakshi Tanwar.

Promoted
Listen to the latest songs, only on JioSaavn.com
Smriti Irani is married to business Zubin Irani for over 15 years. She joined politics in 2003 and in 2014, she was inducted in Prime Minister Narendra Modi's union cabinet. She is the current Minister of Textiles.