Delhi Fire: "Heard Labourers Trying To Run Out", Says Owner Of Nearby Building

Lax enforcement of safety regulations often leads to such accidents; today's is the worst since a similar one in an illegal fireworks factory in Bawana, in the northwest part of Delhi, last year in which 17 were killed

At least 43 people, many of whom were believed to be labourers, died after a fire broke out at a factory in a crowded and congested central Delhi neighbourhood on Sunday morning. Reported at 5.22 am, the blaze occurred in a four-storey building which, like many in the area, housed illegally set up factories and employed labourers from neighbouring states like Bihar and Uttar Pradesh. At least 50 such labourers were believed to be sleeping inside the workshop. The cramped rooms and narrow doorways of the building acted as a death trap once the fire started and people panicked in an attempt to escape.

A senior police officer was quoted as saying by news agency AFP as saying that most of the men who died were sleeping at the time of the fire and died due to asphyxiation. Doctors at nearby hospitals, where the injured were admitted and the bodies taken, confirmed this.

Fire service officials and National Disaster Response Force (NDRF) teams trying to put out the fire and access inner rooms were hampered by the dark and poorly-lit interiors. Television footage of the incident showed firemen and emergency services personnel carrying people out of lanes too narrow to allow fire trucks or even ambulances to enter.

Experts say factories and small manufacturing units that are set up, often illegally, in old and overcrowded quarters of big cities and towns; the cost of land is relatively cheaper.

Such units often also serve as sleeping quarters for labourers who often migrate from villages and small towns in hope of jobs in the big city and try to save money by sleeping overnight at their workplaces.

"The building in which the fire happened has four floors. It is owned by two brothers - Imran and Rehan. They have rented it out for workshops - bags, printing paper and plastic are manufactured there and hundreds of labourers live there," Mohammad Masih, the owner of the adjacent structure, told NDTV.

He also said that few, if any, workshops in the area had legal permits and fewer still had precautions against fires - like extinguishers and fire escapes. Atul Garg, Director of the Delhi Fire Service, said the building that burned down did not have fire clearance and safety equipment was not found.

"I heard many of the labourers trying to run out of the burning building," Mr Masih said, adding that some had tried to escape from the roof or via the chimney.

The lack of urban planning and lax enforcement of building and safety regulations often leads to such deadly accidents. Today's incident is the worst since a similar one in an illegal fireworks factory in Bawana, in the northwest part of the city, last year in which 17 labourers were killed. 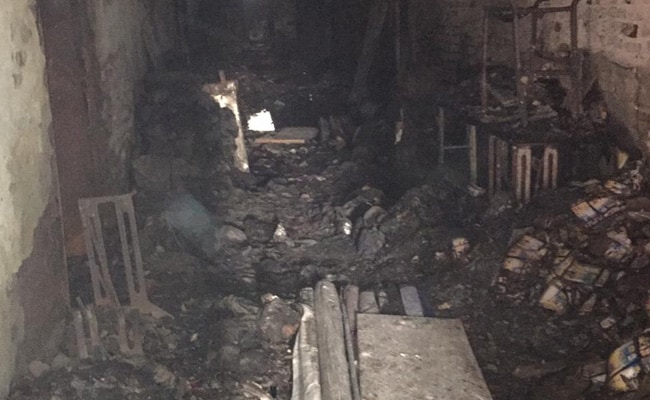 The fire began on the second floor of the building before spreading to other floors. The brothers - against whom a first information report (FIR) has been lodged - are missing.

In a video of the fire rescuers - about a dozen - are seen standing on a balcony and trying to find a way in as smoke billows out from the roof.

Delhi Chief Minister Arvind Kejriwal, who visited the site of the fire on Sunday afternoon, has announced an inquiry into the accident; the report is to be submitted within a week. Mr Kejriwal also announced compensation of Rs 10 lakh to the families of those who died and Rs 1 lakh to each of those injured.