A fire departement official said that more than 50 people were rescued and most of them were affected due to smoke. 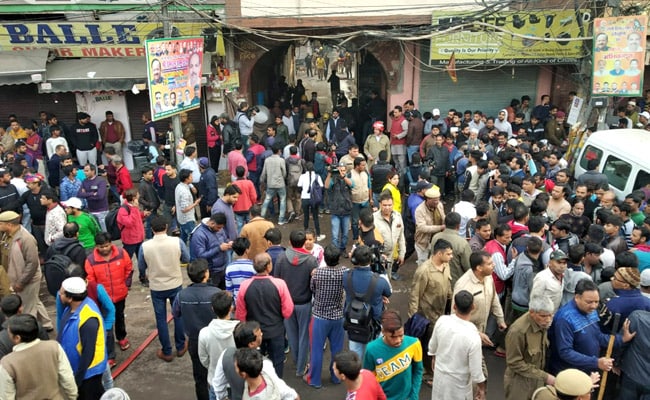 Delhi Fire News: At least 43 people have died in the incident. (ANI)

At least 43 people have died at a fire incident that took place at Delhi's Rani Jhansi Road area. The fire was doused and rescue operation was on, senior fire official Sunil Choudhary told news agency ANI. Another fire department official said that more than 50 people were rescued and most of them were affected due to smoke.

Dec 08, 2019 18:05 (IST)
Delhi police arrest Rehan, the owner of the factory where fire broke out earlier today. 43 people were killed in the fire.
Dec 08, 2019 15:00 (IST)
Defence Minister Rajnath Singh condoles loss of lives
Defence Minister Rajnath Singh has condoled the loss of lives in the incident. "Deeply pained by the loss of many precious lives due to fire in Delhi. In this hour of grief, my thoughts are with the bereaved families. I also pray for the speedy recovery of the injured," Mr Singh.
Dec 08, 2019 13:19 (IST)
Gautam Gambhir on Delhi fire
"I do not wish to indulge in politics but there must be an investigation into the incident. Someone has to take responsibility, it is a tragic incident."
Dec 08, 2019 13:18 (IST)
PM announces Rs 2 lakhs ex-gratia
PM Modi announced an ex-gratia of Rs 2 lakhs each from Prime Minister's National Relief Fund (PMNRF) for next of kin of those who have lost their lives due to tragic fire in Delhi. PM has also approved Rs 50,000 each for those seriously injured in the fire.
Dec 08, 2019 13:16 (IST)
Building owner absconding: Police
Rehan, the owner of the building against whom a case has been registered under section 304 IPC, is currently absconding.
Dec 08, 2019 13:15 (IST)
Case registered against building owner
Case registered under section 304 (Punishment for culpable homicide not amounting to murder) of the Indian Penal Code against owner of the building. 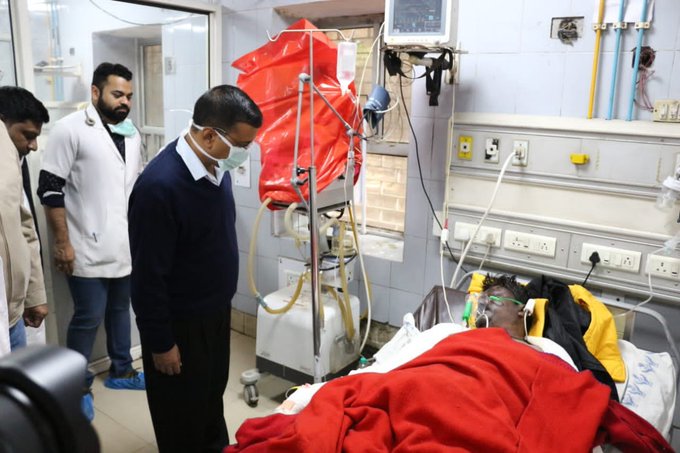 Dec 08, 2019 11:43 (IST)
Rs 10 Lakh Ex-Gratia To Families: Arvind Kejriwal
"It is a very sad incident. I have ordered a magisterial inquiry into it. Compensation Rs 10 lakhs each to be given to families of those dead and Rs 1 lakh each to those injured. The expense of medical treatment of those injured to be borne by the government."
Dec 08, 2019 11:36 (IST)
Arvind Kejriwal arrives at the spot
Delhi Chief Minister Arvind Kejriwal arrives at the spot of fire incident on Rani Jhansi Road. 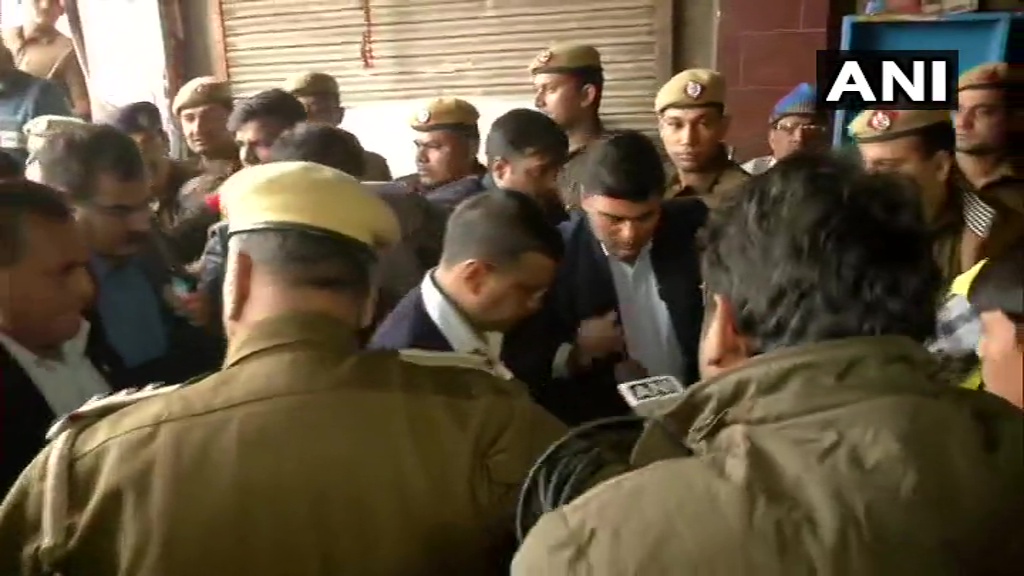 Dec 08, 2019 11:21 (IST)
BJP announces Rs 5 Lakh help for the victims
The Bharatiya Janata Party has announced a help of Rs 5 lakh to the victims' family who lost their lives in the incident. Delhi BJP chief Manoj Tiwari, while speaking to media at the site of the incident, said that the party has decided to help the families of those who died with Rs 5 lakh and those who suffered injuries by Rs 25,000.
Dec 08, 2019 11:14 (IST)
Sonia Gandhi's statement
Congress president Sonia Gandhi has expressed deep shock. Expressing her deepest condolences to the families and loved ones of over four dozen deceased in the tragic accident, Mrs Gandhi hoped that maximum lives will be saved and those injured are treated expeditiously, said a Congress press release. She urged upon the authorities of central and state governments to provide every assistance to victims and their families. Congress chief has also asked Congress leaders and workers to assist the authorities in every manner possible.
Dec 08, 2019 11:10 (IST)
Manoj Tiwari, Anurag Thakur arrive at the spot
A number of politicians, including Union Minister Anurag Thakur, Union Minister Hardeep Puri and Delhi BJP chief Manoj Tiwari have reached the spot.
Dec 08, 2019 11:08 (IST)
President Tweets
Extremely sad to hear the tragic news about fire in Delhi's Anaz Mandi. My thoughts and prayers are with affected families. Wishing an early recovery to those injured. The local authorities are doing their best to rescue people and provide help.
Dec 08, 2019 11:07 (IST)
Rahul Gandhi tweets
"I am saddened by the news of deaths in Delhi's Anaj Mandi. I offer my condolences to the family of the victims and pray for the speedy recovery of those injured."
Dec 08, 2019 10:56 (IST)
Manoj Tiwari tweets
Delhi BJP chief Manoj Tiwari has asked his partymen to reach the spot and help in the rescue operations.
"I am deeply sadenned by the loss of lives due to fire at Anaj Mandi road. I express my condolences to the familes  of the victims. I am reaching there. I have asked party workers to reach there and help people."
Dec 08, 2019 10:38 (IST)
NDRF Arrives At Spot
A team of National Disaster Response Force (NDRF) arrives at the incident spot. 43 people have lost their lives in the fire incident. 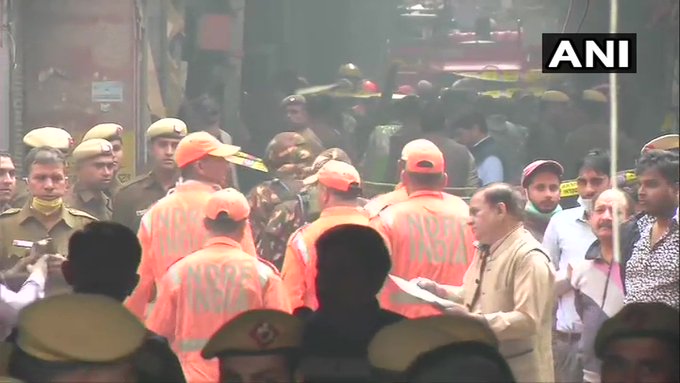 Dec 08, 2019 10:19 (IST)
PM Modi tweets
"The fire in Delhi's Anaj Mandi on Rani Jhansi Road is extremely horrific. My thoughts are with those who lost their loved ones. Wishing the injured a quick recovery. Authorities are providing all possible assistance at the site of the tragedy."
Dec 08, 2019 10:18 (IST)
43 People Dead
The latest update says that the number of deaths have gone up to 43 from 35, as reported earlier.
Dec 08, 2019 10:04 (IST)
Amit Shah tweets
"Tragic loss of precious lives in the fire accident in New Delhi. My deepest condolences with families of those who have lost their loved ones. I pray for the early recovery of the injured.
Have instructed concerned authorities to provide all possible assistance on urgent basis."
Dec 08, 2019 10:00 (IST)
Cause Not Known, 30 Fire Trucks At Spot
30 Fire Trucks At The Spot
The cause of the fire is not known, officials said, adding that over 50 people were inside the factory when the fire broke out, they said. Thirty fire trucks are at the site and have taken the situation under control.
Dec 08, 2019 09:49 (IST)
"Very Tragic", tweets Arvind Kejriwal
"V v tragic news. Rescue operations going on. Firemen doing their best. Injured are being taken to hospitals."
Dec 08, 2019 09:47 (IST)
Atul Garg, Chief Fire Officer, Delhi Fire Service
"Till now we have rescued more than 50 people, most of them were affected due to smoke." 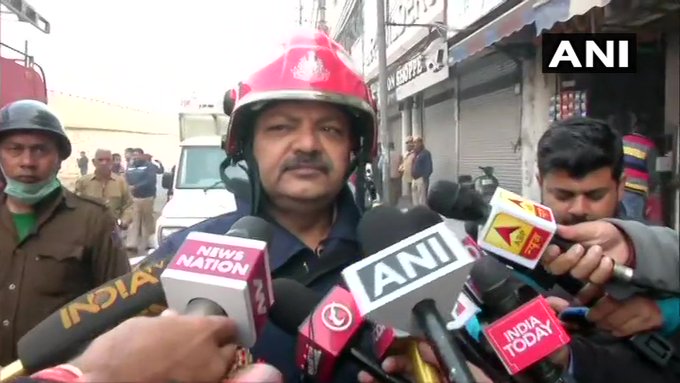