Delhi fire: The cause of the fire is not known, officials said, adding that over 50 people were inside the factory when the fire broke out.

Most of the people who died were labourers, officials said.

The cause of the fire -- which was reported at 5:22 am -- is not known, officials said, adding that over 50 people were inside the factory operating from a residential area when the fire broke out. Thirty fire trucks are at the site and have taken the situation under control. The fire is suspected to have started at the workshop of the bag manufacturing factory.

Chief Minister Arvind Kejriwal has announced a compensation of Rs 10 lakh to families of those killed and additional assistance of one lakh to those who were injured. The government has also ordered a magisterial inquiry into the incident and sought a report within seven days. "The Anaj Mandi fire tragedy is a very sad incident. More than 40 people have died. I have ordered a magisterial inquiry into it. Compensation of Rs 10 lakh each will be given to families of those dead and Rs 1 lakh each to those injured. The expense of medical treatment of those injured will be borne by the government," Mr Kejriwal said after visiting the site of the fire tragedy. The Delhi Police has registered a case against the owner of the factory and the case has been transferred to the crime branch for further investigation.

Revenue Minister Kailash Gahlot said that he has directed the district magistrate (central) to conduct an inquiry and submit a report within seven days.

The factory was operating in an area, whose narrow and congested lanes are lined with many small manufacturing and storage units.

"Most who've died were sleeping when the fire broke out and died due to asphyxiation," Sadar Bazar's assistant commissioner of police was quoted as saying by news agency AFP.

Preliminary investigations suggest short circuit as the cause of the fire. "Prima facie, the fire seems to have occurred due to short circuit. There was a lot of plastic on the premises due to which there was smoke after the fire occurred. The deaths have mostly occurred due to asphyxiation due to smoke. We have shifted most of the injured to LNJP Hospital and Lady Hardinge Hospital," a police official was quoted by news agency ANI.

Chaotic scenes were witnessed at the site of the fire incident with relatives and locals rushing to the area. "I got a call from his friend informing that he has been injured in the incident. I have no clue which hospital he has been taken to," said Manoj, whose brother was working in a handbag manufacturing unit operating from the premises.

Many people trapped inside were rescued and rushed to RML Hospital, LNJP and Hindu Rao Hospital, fire officials said. Some of the people were brought dead to LNJP hospital. Doctors at the hospital confirmed smoke inhalation as the primary cause of the death. Some of the bodies were charred, news agency PTI reported.

The fire in Delhi's Anaj Mandi on Rani Jhansi Road is extremely horrific. My thoughts are with those who lost their loved ones. Wishing the injured a quick recovery. Authorities are providing all possible assistance at the site of the tragedy. 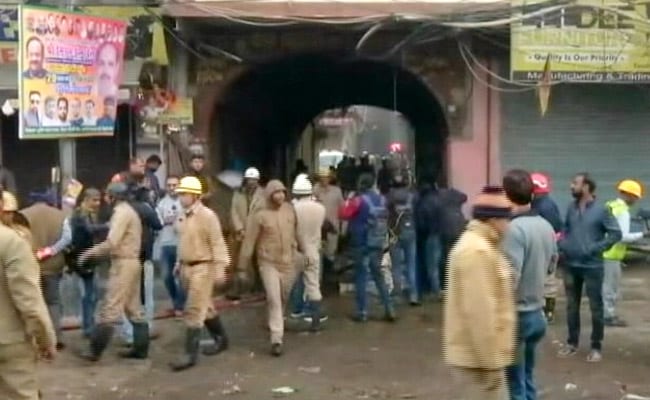 Chaotic scenes were witnessed at the site of the fire incident with relatives and locals rushing to the area.

Tragic loss of precious lives in the fire accident in New Delhi. My deepest condolences with families of those who have lost their loved ones. I pray for the early recovery of the injured.

Have instructed concerned authorities to provide all possible assistance on urgent basis.

The traffic police have asked people not to use Rani Jhansi flyover near New Delhi railway station as the road has been closed due to the incident.

Today's incident is the worst fire tragedy seen by the city since a similar incident in Bawana last year in which 17 labourers were charred to death.

Many factories and small manufacturing units in big Indian cities are often located in old, cramped quarters of the cities, where the cost of land is relatively cheaper.

Such units often also serve as sleeping quarters for poor, mostly migrant labourers and workers, who manage to save money by sleeping overnight at their workplaces.