As per reports, she helped Bhagwant Mann during his campaign for the Assembly election in Punjab. 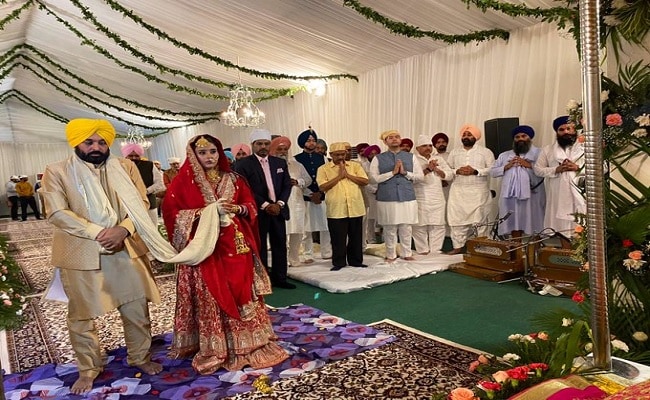 Aam Aadmi Party convenor and Delhi Chief Minister Arvind Kejriwal was among those who arrived in Chandigarh to attend Bhagwant Mann's residence here ahead of Punjab Chief Minister's wedding to Dr Gurpreet Kaur at a private ceremony on Thursday morning.

Addressing reporters, Mr Kejriwal said, "He is embarking on a new journey today. I wish him a happy married life."

Mr Mann, 48 was divorced from his first wife almost six years back. His former wife Inderpreet Kaur and their children are residing in the USA. His daughter Seerat Kaur Mann (21) and son Dilshan Mann (17) had flown from the US to attend his swearing-in ceremony on March 16 this year.

32-years-old Gurpreet Kaur is from Pehowa in the Kurukshetra district. Her father, Inderjit Singh, is a farmer.

As per reports, she helped Mr Mann during his campaign for the Assembly election in Punjab.

"I have come here with my mother...I wholeheartedly congratulate Mann Sahab and his family on this special occasion," said AAP MP Raghav Chadha.

Earlier today, Mr Chadha shared a photo of himself along with Mann, wrote on social media:

The image shared on Instagram also contained a screenshot of a tweet that said, "And, one thought that Raghav Chadha was the most eligible bachelor in AAP."

As per a food menu obtained by ANI, the guests will get to savour the best of Indian and Italian cuisine including Karahi Paneer, Tandoori Kulche, Dal Makhani, Navratan Biryani, Mausami Subzian, Apricot Stuffed Kofta, Lasagna Siciliano and Burrani Raita.

No meal is complete without desserts and a variety of lip-smacking sweets such as Fresh Fruit Triffle, Moong Dal Halwa, Shahi Tukda, Angoori Rasmalai and Dry Fruit Rabari will be there for the guests at the Bhagwat Mann wedding. Those who are health conscious will not be disappointed either as different types of salads will be available.