India Can't Be "Dependent" On Other Countries For Defence: Rajnath Singh

Defence Minister Rajnath Singh said Tejas is not only indigenous, but is also better than its foreign equivalents on several parameters and also comparatively cheaper. 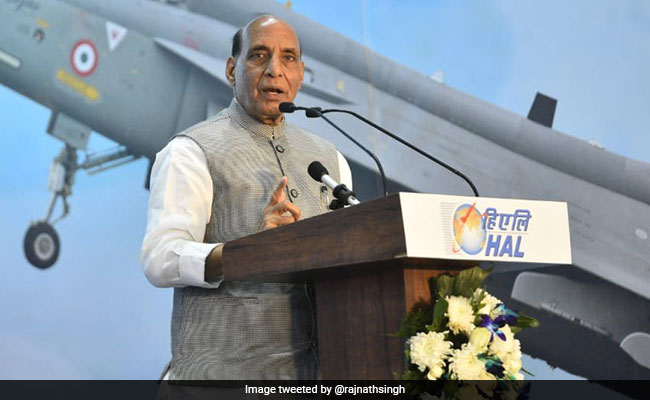 "India cannot remain dependent on other countries for its defence", he said.

Mr Singh said Tejas is not only indigenous, but is also better than its foreign equivalents on several parameters and also comparatively cheaper.

"Many countries have shown interest in Tejas. India will achieve the target of Rs 1.75 lakh crore in the field of defence manufacturing in (a) few years", the minister said.

Inaugurated the HAL's new LCA-Tejas Production Line in Bengaluru today. Under the 'Aatmanirbhar Bharat Abhiyan' India is looking forward to increase its defence manufacturing capabilities. India cannot remain dependent on other countries for its defence. @HALHQBLRpic.twitter.com/7HCmYnjp1P

The delivery of the Tejas LCA to the Indian Air Force under a Rs 48,000-crore deal will begin from March 2024 and around 16 aircraft will be rolled out annually till the completion of the total supply of 83 jets, Chairman and Managing Director of HAL, R Madhavan, said recently.

Mr Madhavan had also said that a number of countries have shown keen interest in procurement of Tejas and that the first export order is likely to come by in the next couple of years.

An HAL statement said Mr Singh appreciated the company's efforts to increase the production capacity of LCA, which is going to be the backbone of IAF fighter fleet in years to come.

"HALs new LCA facility is example of how 'Aatmanirbhar Bharat' is shaping and HAL deserves the largest indigenous order of 83 LCA Mk-IA. LCA is the pride of India and sends the right message to others that India can make fighters of class in-house", he was quoted as saying in the HAL statement.

"The fighter is superior in many ways when compared to other fighters in its category, besides being cost effective. I compliment HAL for working through the COVID times and bringing out this facility. The Company has a lot of talent and more orders should come in its way in future. We cannot depend on others on security issues and therefore will make HAL stronger, whatever it takes," Mr Singh added, according to the statement.