Passengers underwent temperature tests before boarding and could face 14 days of quarantine at a hotel or other location designated by the Maharashtra government on landing. 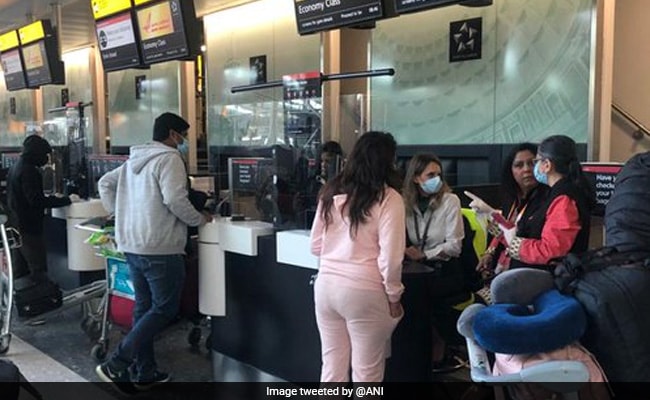 Around 250 Indian students and tourists were seen queuing with their luggage at the airport.

The first Air India flight from the UK, scheduled as part of the Vande Bharat Mission to repatriate Indians stranded overseas due to the coronavirus lockdown, took off from London's Heathrow Airport today and will land in Mumbai in the early hours of Sunday.

Around 250 Indian students and tourists were seen queuing with their luggage at the airport from early on Saturday as they prepared for the journey home.

Each one of them underwent temperature tests before boarding and could face 14 days of quarantine at a hotel or other location designated by the Maharashtra government on landing, with those details to be made available on arrival in Mumbai.

"Finally going back to India! Although it was at the last moment but I was lucky enough to get the ticket of the first flight to India under Vande Bharat Mission," said a relieved Indian student, who was part of a group of seafarers who came to the UK for an examination.

"We got continuous updates from NISAU (National Indian Students and Alumni Union) and ISWAN (International Seafarers'' Welfare Assistance Network) looking after seafarers stuck in the UK. Thanks to all the representatives who worked tirelessly in coordination with the Indian High Commission," said the student, who did not wish to be named.

Air India is providing a kit for all passengers confirmed to fly, with meals, snacks, sanitizer, mask and gloves.

"So far people travelling to Hyderabad, Bengaluru and Mumbai have received calls. And there are a lot of other guys who are waiting for flight schedules to their own states," said Akhil Dharmaraj, a marine engineer from Kerala enrolled at the South Tyneside College in Tyne and Wear in north-east England who was due to fly back to India after giving a management level exam in March.

"A group of students from our group have already departed to Mumbai today. People from other states are not allowed to board the flights to a particular destination," added Mr Dharmaraj, who is waiting for his turn to fly back to Cochin.

Organisers have said that further flights are planned from the UK to other cities of India as well in phase two of the Vande Bharat Mission.

"We are delighted that the Vande Bharat Mission has been launched for allowing stranded Indians who are in distress to go back to India and thank the Indian government for this, who we have been closely working with ever since the situation started to emerge," said NISAU UK Chair Sanam Arora.

"We have a dedicated 20-member COVID-19 volunteer response team that is working night and day and all over the UK to help our fellow Indians in need," she said.

The first Air India flight will land at Mumbai's Chhatrapati Shivaji International Airport at 1.30 am IST on Sunday, when the passengers are expected to be screened and allotted quarantine locations based on affordability.

"I am delighted to be going back," said Vedant Anil Sharma, a first-year International Business Management student at Royal Agricultural University in south-west England, who is on the first flight back to India.

The schedule is being coordinated by the Indian High Commission in London, with payments made directly to Air India by confirmed passengers.

The first set of seven flights to India will prioritise Indian passport holders on vulnerability and health grounds.

"The flight is 100 per cent booked as Indian citizens depart for Mumbai from London by the first evacuation flight today. Also, following the mantra of the Honourable Prime Minister Narendra Modi, Do Gaj Doori, Bahut Hair Zaroori," the High Commission said in its safety message on social distancing.

The Air India flights landing at London Heathrow will also be bringing back some expatriates and UK visa holders wanting to fly back to the UK.

"This is the biggest-ever repatriation operation anywhere in the world at any time. Flights will be scheduled until the last Indian has been flown back home, no one will be left behind," said Kuldeep Shekhawat, the President of the Overseas Friends of BJP (OFBJP) diaspora group who is helping with the coordination efforts.

"The flight schedule in subsequent phases from the UK will depend on demand and if there are enough passengers, direct flights will be organised to other Indian cities which have an international airport," he said.