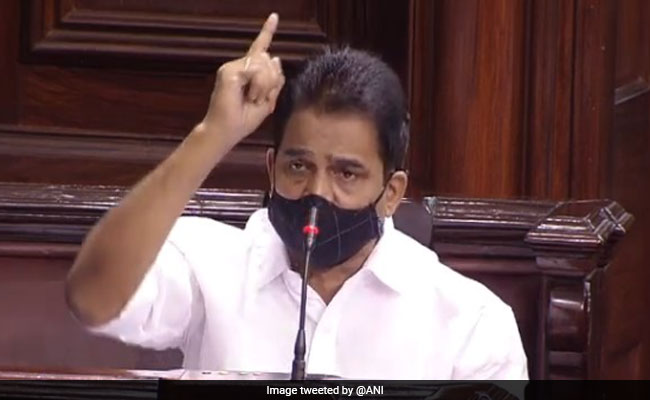 "It is very clear that this government's motive is to destroy our farmers," KC Venugopal said. (File)

Congress MP KC Venugopal on Sunday asked the centre to reconsider the two agriculture sector bills and alleged that its motive is to give a push to the corporate sector.

"It is very clear that this government's motive is to destroy our farmers and help the corporate sector. Our party has decided to oppose the Agriculture Bills. The government has to reconsider the bills, at least they should have sent it to select committee," he said while speaking to ANI.

Union Minister of Agriculture and Farmer Welfare Narendra Singh Tomar moved bills related to the agriculture sector in the Rajya Sabha today.  These Bills are -- Farmers' and Produce Trade and Commerce (Promotion and Facilitation) Bill, 2020 and Farmers (Empowerment and Protection) Agreement on Price Assurance and Farm Services Bill, 2020. Both of them were passed by the Lower House with a voice vote a couple of days back. The bills were cleared by the Upper House in the afternoon.

The Farmers' Produce Trade and Commerce (Promotion and Facilitation) Bill, 2020 permits the electronic trading of farmers' produce and allows the setting up transaction platforms for facilitating direct online buying and selling of farm products.

The Farmers (Empowerment and Protection) Agreement on Price Assurance and Farm Services Bill, 2020 provides for a farming agreement prior to the production or rearing of any farm produce. A guaranteed price to be paid for the purchase of farming produce will be mentioned in such agreements.

Prime Minister Narendra Modi had earlier described this proposed legislation as "historic" and said that they will rid farmers and the farm sector of middlemen and other bottlenecks. The Prime Minister further stated that these agrarian reforms will open new doors for farmers to sell their produce, which will fetch them more profit for their produce.