Chirag Paswan has been a picture of bereavement ever since his father breathed last at a Delhi hospital on Thursday. 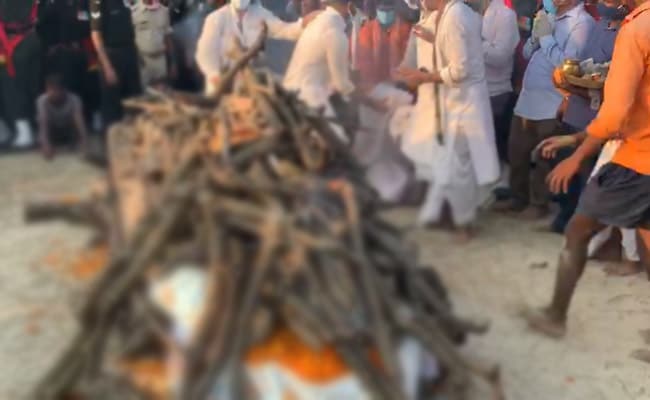 The burden of grief, at a juncture that might be most critical in his political career, proved too much for Lok Janshakti Party president Chirag Paswan who fell unconscious after lighting the funeral pyre of his father Ram Vilas Paswan in Patna on Saturday.

The 37-year-old lawmaker has been a picture of bereavement ever since his father breathed last at a Delhi hospital on Thursday.

Mr Chirag, known to be a dutiful son who even played the barber for his father during the nationwide lockdown, raised a banner of revolt against Bihar Chief Minister Nitish Kumars JD(U), announcing the stunning decision to go solo in the assembly polls, while spending most of his time beside Mr Paswan senior's hospital bed.

He wept when Prime Minister Narendra Modi visited their Delhi residence to pay his last respect.

Mr Chirag wailed inconsolably on Saturday morning when BJP MP and former minister Ram Kripal Yadav, who has known Mr Chirag since he was a child, visited their Patna house.

Mr Yadav was also moved to tears and the two stood for some time, holding each other tightly.

At the Digha ghat on the bank of the Ganges, Mr Chirag fainted after lighting the funeral pyre, but was saved from crashing on to the ground by his cousins who had been beside him, helping him perform the rituals.

"He is out of danger. The mental stress coupled with the dehydration brought about by standing for hours in a hot and humid weather may have taken a toll," said a source close to the family.

After the cremation, Union minister and senior BJP leader Giriraj Singh told reporters, "Paswan's death marks the end of an era. He must have been the last surviving political leader with decades of parliamentary experience. His popularity can be gauged from the fact that all central ministers from Bihar are present here. I can also see representatives from various political parties."

"He is one of the few luminaries who stoutly defended the Mandal Commission when its recommendations were implemented by the VP Singh government, and rebuffed detractors when Prime Minister Narendra Modi's well-intentioned quota for economically weaker sections was being opposed," Singh said.

"We are all with the bereaved family in this hour of grief," he added.

Onlookers remarked that it needs an "ajaat shatru" (one with no enemies) like Ram Vilas Paswan to evoke such tenderness from someone known for his acerbity, that too at a time when his party is not happy with the political line taken by the successor -- Chirag.