CBSE paper leak: The final decision of not conducting class 10 Maths test came after a thorough analysis and evaluation of the answer sheets 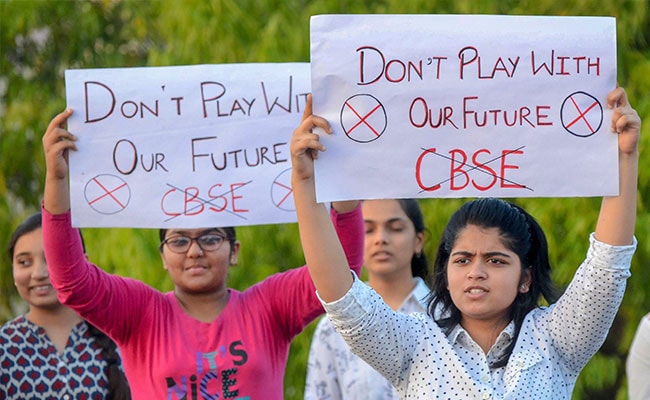 CBSE paper leak: No re-test for Class 10 maths paper, said a board official

New Delhi: Class 10 students will not have to sit for a re-exam for the CBSE math paper that was leaked before the exam last week, the government said today. The decision was taken in the interest of students, said an official.

A "thorough analysis and evaluation of the answer sheets" showed no specific trend that the leak had impacted the exam outcome, tweeted Union Education Secretary Anil Swarup.

Last week, the government announced that Class 12 students have to take the economics final exam again on April 25, amid huge anger over the question papers being leaked. For the class 10 math exam, Education Minister Prakash Javadekar had said it would only be held in Delhi and Haryana if the police investigation points to a "large-scale leak".

The date of the Class 12 re-test was aimed at helping students meet deadlines for college admissions.

The CBSE had been questioned why the class 10 Math exam was not scrapped despite an email alerting a top official to a leak nine hours before, Mr Swarup said there wasn't enough time and the exam couldn't practically be solved. The sender had claimed that the math paper was leaked on WhatsApp and urged the CBSE to cancel the paper, the official said.

Promoted
Listen to the latest songs, only on JioSaavn.com
"The mail came at 1.29 am on March 28 (early Wednesday) but the mail was seen at 8.55 am by the CBSE chairman. The paper was sent for verification. Just because there was an alert, we couldn't have stopped the exam," said Mr Swarup.

The government's decision to not hold the class 10 Maths re-exam is a relief for more than 14 lakh students, who were anticipating an exam in July. Many angry parents and students have sought action against the CBSE.