Nitin Agarwal, a third-term MLA from Hardoi, is the son of former state minister Naresh Agarwal who had switched over to the BJP from the Samajwadi Party. 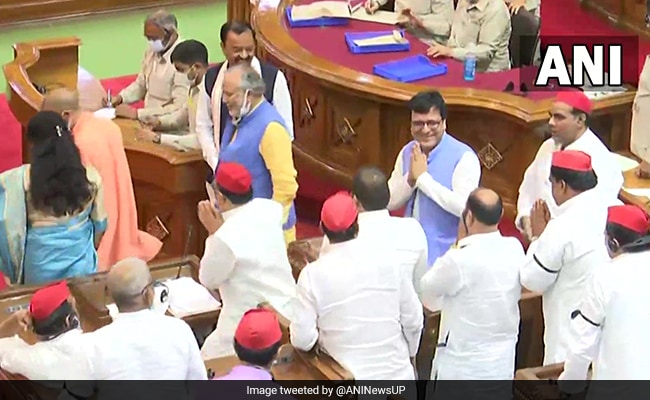 A total of 368 votes were cast, out of which four were declared invalid.

The Bahujan Samaj Party, which has 16 MLAs, and the Congress with its seven boycotted the election.

Carrying placards, Congress workers protested in front of the assembly building and accused the ruling Bharatiya Janata Party of trying to divert attention from the problems faced by the state.

Mr Agarwal is now the state's first Deputy Speaker in 14 years. Speaker Hriday Narayan Dixit called it an important post, saying the tradition goes dates back to the Vedic era.

Mr Agarwal, a third-term MLA from Hardoi, is the son of former state minister Naresh Agarwal who recently switched over to the BJP from the Samajwadi Party.

BJP has 304 MLAs in the 403-member House at present and the SP 49, making it a no-contest election as the ruling camp was supporting the SP rebel.

Apna Dal (Sonelal) with its nine MLAs is a BJP ally. The Rashtriya Lok Dal and the Nishad party have one MLA each. There are three independent MLAs, while two are unattached. Seven seats are vacant.

The election, coming just months ahead of the crucial assembly polls, highlighted the absence of any anti-BJP front in the state with Mayawati's BSP and the Congress refusing to side with the SP.

The three have already decided to fight the assembly polls separately.

The SP, however, seemed to have won the support of members of some regional outfits as it garnered 60 votes, 11 more than its strength of 49 including Mr Agarwal.

SP chief Akhilesh Yadav has already made it clear that he will have no alliance with the bigger parties and is forging tie-ups with the smaller regional parties.

Back in 2004, BJP's Rajesh Agarwal was elected unopposed as Deputy Speaker during the Mayawati government's term.

After the declaration of the results, UP Chief Minister Yogi Adityanath justified supporting the rebel SP candidate.

He said the ruling party had backed a young person, but the opposition was unable to bring forward a young face in the past four and half years. He termed the SP an "anti-youth" party which was unable to accept its own member.

Newly elected Deputy Speaker Mr Agarwal said he will take all members along in the functioning of the House.

Apparently referring to Mr Agarwal, Leader of the Opposition Ram Gobind Chaudhary said he was not made a minister but handed a "lollypop" when the term of the House was nearly over.