BJP Must Accept Sabarimala Like They Did Ayodhya Ruling: Digvijaya Singh

Digvijaya Singh was reacting to the top court's decision to refer the Sabarimala and similar religious issues to a larger bench. 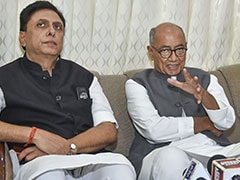 Digvijaya Singh also commented on the centre's move to strip Kashmir of its special status.

Senior Congress leader Digvijaya Singh said on Thursday that the RSS and the BJP should accept the Supreme Court's decision in the Sabarimala temple case just as they did in the Ayodhya matter.

He was reacting to the top court's decision to refer the Sabarimala and similar religious issues to a larger bench.

"Our party has always been of the opinion that the court should decide issues like Ayodhya dispute. I am happy that all parties accepted the SC decision on this (Ayodhya) issue," he said.

"The BJP and RSS should learn from this...All should accept the verdict of Sabarimala too, like the SC decision on Ayodhya," the Congress leader added.

The Supreme Court on Thursday said a larger seven-judge bench will re-examine various religious issues, including the entry of women of all ages into the Sabarimala temple.

Earlier, addressing party leaders at state Congress headquarters Indira Bhawan at a program to mark the birth anniversary of Jawaharlal Nehru, Mr Singh said history is being rewritten by the current regime in the country.

He also lamented that "more than half the Congressmen don't know about what Article 370 is".

"They are saying that Centre did a good job (by abrogating its provisions). What good job? Kashmir is slipping out of hand. If we want Kashmir then we will have to keep Kashmiri people with us," he told the gathering.

Jyotiraditya Scindia, one of the top Congress leaders from Madhya Pradesh, was among those who had welcomed the NDA government's decision to scrap Kashmir's special status.