Civil Aviation Minister Ashok Gajapathy Raju tweeted earlier in the day that he had ordered a probe. But by evening, the minister discovered that he didn't really need an inquiry to discover the facts. Someone just had to watch the CCTV footage that has a time stamp too. 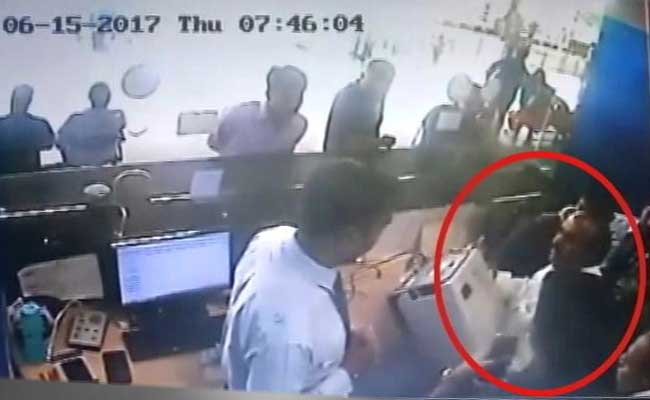 TDP lawmaker Diwakar Reddy went on a vacation to France on Friday after domestic airlines banned him.

HYDERABAD: Banned by all domestic airlines from flights for creating a ruckus at the Visakhapatnam airport, TDP lawmaker JC Diwakar Reddy on Friday took an international flight to Europe. Sources close to Mr Reddy told NDTV that the parliamentarian was on his way to France for a week-long vacation that he had planned much in advance.

Mr Reddy, the second lawmaker to be grounded by domestic airlines for assault and misbehaviour since March, had shouted at IndiGo airline officials, tried to throw a printer on the floor and pushed a senior airline official. He was angry that the airline had refused to accommodate him because he had showed up late for his flight from Visakhapatnam to Hyderabad.

The 73-year-old TDP lawmaker had told NDTV that Civil Aviation Minister Ashok Gajapathy Raju, who is also from the TDP, had helped him board the flight after the ruckus.

The minister, however, contradicted him on this point, saying he did not intervene.

But Mr Raju - who had stood up to pressure tactics from the Shiv Sena and its lawmaker Ravindra Gaikwad in March - initially did not comment on the specifics of this incident. On Friday morning, the minister announced on Twitter that he would "get the entire incident at Vizag airport inquired into to find out the exact details and ensure that lawful outcomes follow".

I will get the entire incident at Vizag Airport enquired into to find out the exact details and ensure that lawful outcomes follow.

The CCTV footage from the airport - that convinced IndiGo to first ban the lawmaker -had been widely telecast by television channels. In comments to his tweet, many pointed to the minister treating his party colleague with kid gloves.

It isn't clear if there was some other intervention too.

But by evening, the minister discovered that he didn't really need an inquiry to discover the facts. Someone just had to watch the CCTV footage that has a time stamp too.

"DGCA (Directorate General of Civil Aviation, or the aviation regulator) has issued a safety regulation that people are expected to report 45 minutes before. Notwithstanding anything, he (Reddy) has not done it. It is clear from the CCTV cameras. So that's it," the minister added.

Promoted
Listen to the latest songs, only on JioSaavn.com
The minister also appeared to suggest that his party colleague had misled him.

Asked if he had helped Mr Reddy, the minister - who was at the Vizag airport at the same time as the lawmaker - said his TDP colleague did come to him and "told me that I have been waiting for one hour. I have been denied boarding". The minister insists he did not help his colleague but only told airport officials to verify the facts from the CCTV footage.