Backed By BJP, Samajwadi Party MLA Set To Be UP Assembly Deputy Speaker

A miffed Samajwadi Party hit out at the BJP, accusing it of trying to sabotage democracy. 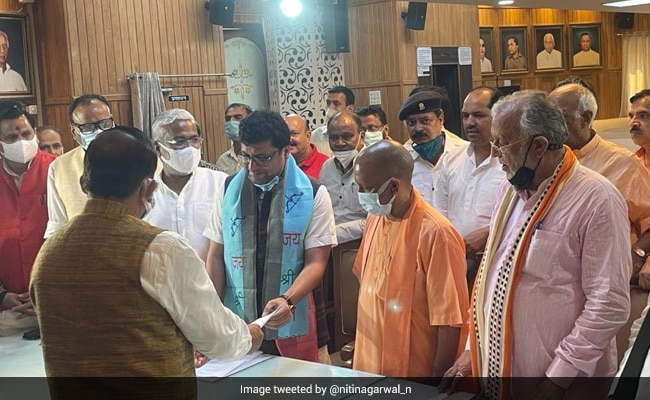 Nitin Agarwal, who was elected as a legislator on the Samajwadi Party ticket but then cozied up to the ruling BJP, is all set to be the deputy speaker of the Uttar Pradesh Assembly with the support of the BJP.

A miffed Samajwadi Party, which has fielded Narendra Verma as its official candidate for the contest that is taking place just months ahead of the 2022 assembly polls, hit out at the BJP, accusing it of trying to sabotage democracy, and asserted that the post should traditionally go to the opposition party.

According to sources close to PTI, Samajwadi Party had moved the Speaker of UP Legislative Assembly seeking disqualification of Nitin Agarwal 5-6 months and around 15-20 days back the Speaker rejected the petition.

Chief Minister Yogi Adityanath and UP BJP chief Swatantra Dev Singh were present during the filing of nomination on Sunday by Nitin Agarwal, whose father Naresh Agarawal had quit the SP and joined the BJP in 2018.

Nitin Agarwal wore a blue ''patka'' bearing the ''Jai Shri Ram'' slogan at the time of filing his nomination. His father and former UP minister Naresh Agarwal was also present.

After filing the nomination papers, the MLA told PTI that he has not formally joined the BJP.

SP nominee Narendra Verma also accused the BJP of "twisting" parliamentary traditions and said the post should go to the opposition.

"I am the SP candidate and the post of deputy speaker as per traditions goes to the principal opposition party. Hence, it should go to us.

"He (Nitin) is my younger brother. He won on a Samajwadi Party ticket and after winning the polls, he started working against the SP... the BJP is breaking and twisting the parliamentary traditions. We do not expect anything from the ruling party," he said.

Mr Verma, a Kurmi leader, was accompanied by Leader of Opposition in UP Assembly Ram Gobind Chaudhary and rebel BSP MLAs during the filing of nominations at the UP Vidhan Bhavan on Sunday.

Leader of Opposition in UP Assembly Ram Gobind Chaudhary claimed that the Samajwadi Party wanted a Dalit or a backward as the deputy speaker, "but the BJP did not want so, and hence no election was held in four-and-half years ".

"No meeting was held in this regard, but with Assembly elections approaching, the BJP suddenly made SP MLA Nitin Agarwal its candidate after four and half years," he said.

The last deputy speaker of the UP Legislative Assembly was the BJP's Rajesh Agarwal, who was elected unopposed in 2004.

Rajesh Agarwal told PTI that the role of the Deputy Speaker is to conduct the proceedings of the House in the absence of the Speaker.

A three-time SP MLA from Hardoi, Nitin Agarwal said if elected as the deputy speaker of the assembly, he will discharge his duties in accordance with the Constitution.

"The government's priority is that everything should be transparent. My priority as a deputy speaker will be to ensure the same," he said.

UP's law minister Brajesh Pathak, when asked about the reasons for the election, said it is was the demand of the MLAs.

Principal Secretary of UP Vidhan Sabha Pradeep Dubey said only the two candidates have filed nomination papers and the voting will take place on Monday.

At present, the BJP has 304 MLAs in the 403-member UP Legislative Assembly followed by the Samajwadi Party which has 49 MLAs. Bahujan Samaj Party has 16 MLAs, while the Congress has 7 MLAs.

BJP's ally Apna Dal (Sonelal) has 9 MLAs, while the Suheldev Bharatiya Samaj Party has 4 MLAs. There are 3 independent MLAs, while there are 2 unattached MLAs. The Rashtriya Lok Dal and the Nirbal Indian Shoshit Hamar Apna Dal have 1 MLA each.

Naresh Agarwal took a swipe at the SP and said that it will follow the "tradition of witnessing defeats".

Dismissing suggestions that the BJP government, with this move, was trying to reach out to a community which was unhappy with the party, Mr Agarwal said, "The government has done a lot for all the sections of the society. This government does not believe in appeasement, and represents everybody, and does not do appeasement politics."

Reacting to the opposition's criticism, Parliamentary Affairs Minister Suresh Khanna said Nitin Agarwal became an MLA on an SP ticket, and even today is an SP MLA.

"All the parliamentary traditions were followed. And, if there are two candidates in the fray, there will be voting," he said.

On allegations by the opposition that the BJP is trying to sabotage democracy, Mr Khanna said, "These allegations are being levelled for a long time, and there is no strength in them. What is sabotage? I don't think so. It is within the purview of the rules and regulations of the House."