Azam Khan had been asked on Tuesday to respond to Prime Minister Narendra Modi's new plan to connect madrasas to mainstream education. 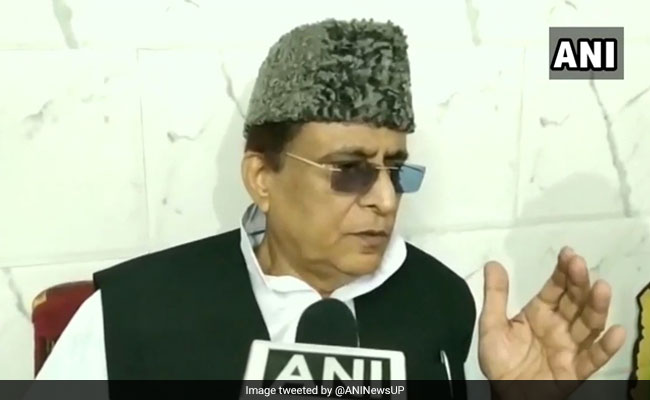 Azam Khan said if the centre wants to help madrasas, they should bring improvements in them.

Samajwadi Party leader Azam Khan has stirred a new controversy by saying madrasas "do not produce people like Nathuram Godse or Pragya Singh Thakur", referring to Mahatma Gandhi's assassin and the BJP lawmaker in the same breath.

Azam Khan, who is prone to making highly contentious comments, had been asked on Tuesday to respond to Prime Minister Narendra Modi's new plan to connect madrasas to mainstream education.

"Madrasas don't breed those of Nathuram Godse's nature or with a personality like Pragya Thakur's. First announce that those propagating thoughts of Nathuram Godse will be declared enemies of democracy, those convicted for terror activities won't be rewarded," said Azam Khan, according to news agency ANI.

Pragya Thakur, an accused in the 2008 Malegaon blasts and out on bail, won last month's election from Bhopal as a BJP candidate. She remained in the news throughout her campaign over provocative statements, including that Nathuram Godse, who killed Gandhi in 1948, was a "patriot".

Azam Khan said if the central government wanted to help madrasas, then they should bring improvements in them.

"Religious teaching is given at madrasas. At the very same madrasas, English, Hindi and Maths are taught. This has always been done. If you want to help, improve their standard. Build buildings for madrasas, provide them with furniture and midday meals," said the parliamentarian from Uttar Pradesh's Rampur.

Though the Samajwadi leader appeared critical of the government's scheme, announced yesterday by Union Minister Mukhtar Abbas Naqvi, many Muslim clerics have welcomed it.

Mr Naqvi had said: "Madrasas are in large number across the country. They will be connected with the formal education and mainstream education so that those children studying there can also contribute in the development of the society."

He explained that madrasa teachers across the country would be given training from various institutions in subjects such as Hindi, English, Maths, Science and Computers. "This programme will be launched next month," he posted on Twitter.

As part of its outreach to minorities, the government will give out five crore scholarships for the education of minorities over the next five years. Half the beneficiaries will be girl students.

Mr Naqvi said the outreach was part of the government's efforts to create an atmosphere of healthy inclusive growth by eradicating the "disease of communalism" and appeasement politics.

The modernisation of Madrasas is in line with a plan PM Modi had outlined during his campaign in the previous 2014 polls.

"Hold a Quran in one hand and computer in the other," Prime Minister Narendra Modi had said.