Citizenship (Amendment) Bill: Two columns have been dispatched to the Kanchanpur and Manu areas of the state, while a third is on standby in Bongaingon in Assam.

Violent protests have broken out in Guwahati and parts of Assam and the North East over the controversial Citizenship (Amendment) Bill tabled before the Rajya Sabha by Home Minister Amit Shah this afternoon. The Indian Army has sent two columns, each consisting of 70 soldiers and one or two officers, to Kanchanpur and Manu in Tripura and two others are on standby in Assam's Dibrugarh and Bongaigaon. A Police QRT (Quick Response Team) has been dispatched to Assam's Dibrugarh district and a total of 5,000 paramilitary personnel have been deployed across the North East. The Assam government has also suspended mobile and internet services in 10 districts and imposed an indefinite curfew in Guwahati.

The region has seen widespread protests over the bill, which seeks to make non-Muslim refugees from Afghanistan, Pakistan and Bangladesh Indian citizens. Protesters, who include students, civil society members and political leaders allied with the ruling BJP, have expressed concerns that refugees allowed by the bill could endanger identity and livelihood of indigenous people.

In Assam, protests erupted across different parts of the BJP-ruled state with the security forces resorting to lathi-charges in Dispur, Guwahati, Dibrugarh and Jorhat. According to news agency PTI senior civil and police officers are incommunicado but hundreds of protesters have been detained in state capital Guwahti and other places like Dibrugarh and Jorhat, news agency PTI reported.

Assam Chief Minister Sarbananda Sonowal was among those stuck at Guwahati Airport once protests broke out. Mr Sonowal's security detail, however, managed to take the Chief Minister to his residence through the city, parts of which resembled a war zone.

The Tripura government on Tuesday blocked mobile internet and SMS services across the state for 48 hours because of the protests. A two-month-old baby died while being taken to a hospital in Sepahijala as protests blocked traffic, police said. 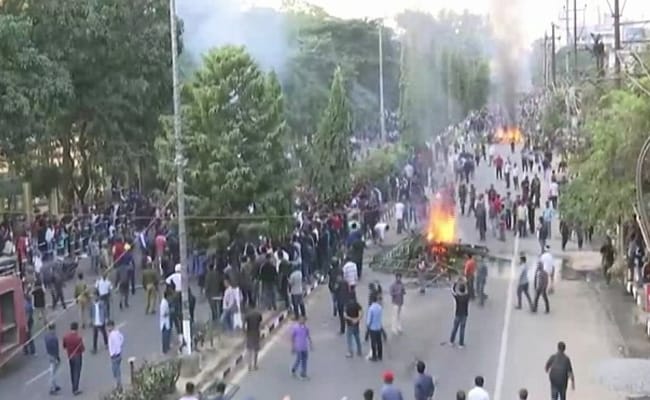 The communications clampdown came into effect even as many demonstrators raised slogans against the centre in Agartala, demanding the state be kept out of the purview of the bill. Earlier, protesters set fire to a market with shops mostly owned by non-tribals in the northeast state's Dhalai district.

Last week Union Home Minister Amit Shah, who led the centre's push on the Citizenship (Amendment) Bill in the Lok Sabha on Monday and did so again in the Rajya Sabha today, held extensive meetings with stakeholders in the North East, saying appropriate exceptions had been made and urging protesters to stand down.

Addressing the Rajya Sabha this afternoon, Mr Shah said Muslims of the country need not fear the Citizenship Bill. "They are and will remain citizens of the country," he said. The Home Minister faced powerful rebuttals from opposition leaders, including the Trinamool Congress's Derek O'Brien, who compared the centre's actions on the Citizenship Bill and the NRC to Nazi Germany.

Following from those meetings the draft version of the Citizenship Bill excludes tribal areas of Assam, Tripura, Meghalaya and Mizoram, as well as the area under "The Inner Line" permit system.