Akhilesh Yadav congratulated the exam toppers for their academic performance at an event in the state capital Lucknow. 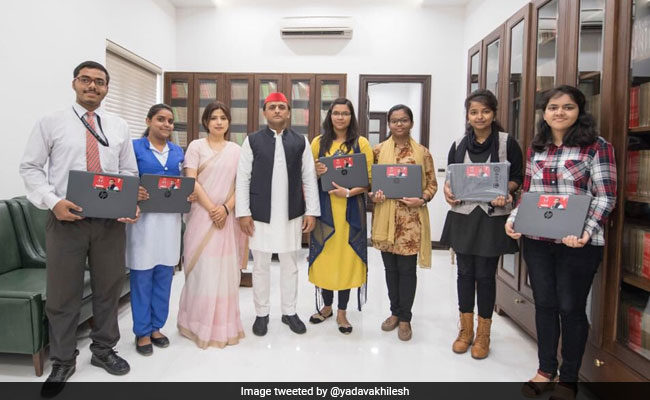 Lucknow: Former Uttar Pradesh Chief Minister Akhilesh Yadav today gave laptop computers to students of various boards who have topped the Class 10 and 12 examinations in the state, and criticised the ruling BJP for not felicitating them yet.

"We are fulfilling our promise to give laptops to meritorious students. We want to remind the BJP that they had made a promise in their 'Sankalp Patra' to give the students laptops and free data but the promise was not fulfilled," he said.

The Samajwadi Party president termed the BJP "anti-youth" for not honouring the students until now.

"The BJP has forgotten all promises made to the people," Mr Yadav said.

"The BJP government has turned a blind eye towards farmers, youngsters, poor labourers and traders. People are so much agitated with the BJP that in the 2019 Lok Sabha elections they will forget the BJP, which forgets its promises. People will give a befitting reply to the party," he said.

Promoted
Listen to the latest songs, only on JioSaavn.com
Terming the BJP a "dhokebaaj" party, he accused the saffron party of deceiving farmers, traders and the poor.

"Youngsters are losing jobs. Non-payment of dues to farmers has resulted in they resorting to protests, and a farmer died in Baghpat," he said.
Comments
Akhilesh YadavExam toppersBJP