Prime Minister Narendra Modi yesterday criticised party leaders who misbehaved in public and, although he did not name Akash Vijayvargiya, his comments have been seen as a warning to erring party members 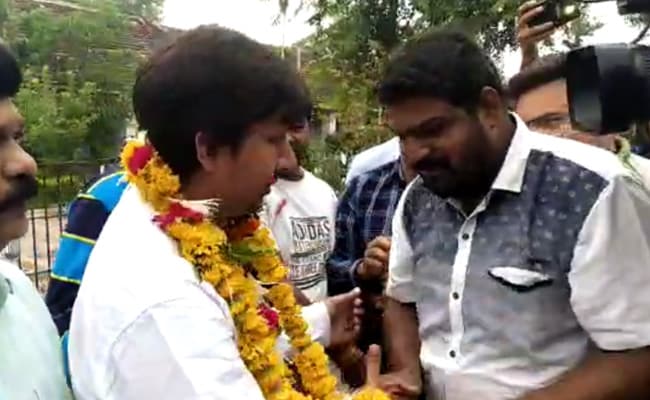 Local BJP leaders in Indore have hastened to explain their reception of Akash Vijayvargiya, son of senior party leader Kailash Vijayvargiya, on his release from jail yesterday, after Prime Minister Narendra Modi criticised those who "misbehave or take the party for a ride or show arrogance in public".

Akash Vijayvargiya had assaulted a city official with a cricket bat last Wednesday. On Sunday, he walked out of prison to a grand welcome; the day before, some supporters fired shots in the air to celebrate his bail. Party workers who had gathered outside the prison welcomed him with garlands.

"Akash was not welcomed (after he got bail). No one went to welcome him. I had gone to the district jail Sunday morning to bring Akash, and took him home," Ramesh Mendola, a BJP lawmaker, said yestterday.

"We did not host the welcome function. We don't even have permission for such a reception," he added.

A furious Prime Minister Modi had made it clear Akash's conduct was unacceptable and action had to be taken. "If we have to lose an MLA, so be it. We have to set an example to prevent a repeat," he reportedly told lawmakers.

"Whoever it may be, whoever's son he may be, such arrogance, misbehavior cannot be tolerated and action should be taken against them," PM Modi continued, referring to what he called the "Indore incident".

In a widely-shared video clip, Akash, 34, was seen chasing the official and beating him with the bat as policemen watched. The official was part of a team that was removing encroachments from a colony. Akash later claimed he had reacted to the official abusing some women.

"Sometimes such incidents happen due to over enthusiasm or in retaliation to acts from the other end. The first-time MLAs particularly should be very cautious and should show self-restraint. But I don't think it's a crime that cannot be excused," he said.

Meanwhile, Kailash Vijayvargiya, the BJP's Bengal campaign in-charge in the national election, downplayed his son's offence, calling him a "kachha khiladi" or "novice" and insisting that too much was being made of an issue that was not big.

The video was condemned by rival parties.

"PM Modi has done his job in the Akash Vijayvargiya matter. Now the state BJP needs to act on PM's words by expelling Akash from the party. Akash also needs to quit as MLA," Congress spokesperson Pankaj Chaturvedi said.

Akash was unapologetic and hinted that such events could happen again if he was provoked. "I am not guilty or embarrassed about what I did as it was in public interest... I pray to god that I do not have to pick up the bat again (I pray to god ki vo dobara ballebazi karne ka avsar na de)," he said right after stepping out of prison.