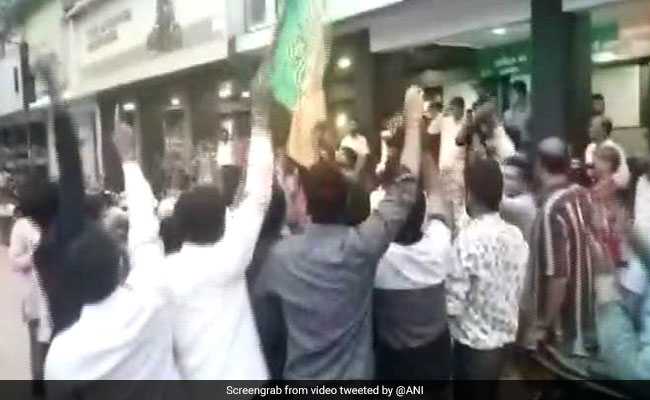 The BJP, however, distanced itself from the celebratory firing.

A video that shows celebratory shots being fired outside the office of BJP legislator Akash Vijayvargiya, who was granted bail in an assault case on Saturday, has prompted sharp reactions from rival Congress. The BJP, however, has distanced itself from the celebratory firing in Madhya Pradesh's Indore, saying the men seen on video were not linked to the party.

Akash Vijayvargiya, son of BJP's national general secretary Kailash Vijayvargiya, walked out of prison this morning four days after his arrest for thrashing a civic body official with a cricket bat in Indore. Party workers, who had gathered outside the prison, welcomed him with garlands.

In a video, which was shot on Satuday, several men can be seen celebrating outside his office after he was granted bail. Some of them are seen dancing with BJP flags, and one man, Kripal Singh, who was a part of the crowd, fires gunshots in the air. The video has gone viral on social media.

Madhya Pradesh: Celebratory firing outside BJP MLA Akash Vijayvargiya's office in Indore after he got bail in an assault case. (29-06) pic.twitter.com/d1j2d03hLY

The Congress, which said that firing at a public place is a "crime", has demanded a case should be filed over the celebratory firing. "Firing at a public place, where a crowd has gathered, is a crime. We demand that the police file a first information report and arrest the men concerned," Congress spokesperson Neelabh Shukla was quoted as saying by news agency PTI.

Another Congress leader accused the BJP of governing with "Godse's principles". "This is Mahatma Gandhi's nation and BJP party is trying to run this nation with the principles of Nathuram Godse (the man who killed Mahatma Gandhi). Kamal Nath-led government will work for this state and we are working towards better health, education and security condition," Kunal Chaudhry, Madhya Pradesh youth Congress chief, said.

The BJP, however, distanced itself from the celebratory firing. Party spokesperson Rajnish Agarwal said, "We have no knowledge of any BJP leader involved in any celebratory firing outside our office in Indore."

Speaking to NDTV, Kripal Singh said that he is not linked to the BJP or Akash Vijayvargiya. "We were only celebrating. I don't know Akash Vijayvargiya personally. The shots were fired from air gun, which does not need a licence."

Senior police officer Subodh Shotriya from Sanyogitaganj police station has said the matter is under probe.

On Wednesday, Mr Vijayvargiya, a first-time BJP legislator who represents the assembly seat of Indore-3, was arrested after he was caught on video assaulting a civic body official.

After he was walked out from prison this morning, he said he was "not guilty or embarrassed about what I did as it was in public interest". "I will keep working for the betterment of the region and the public. I pray to god that I should not be given another opportunity to pick up the bat (I pray to god ki vo dobara ballebazi karne ka avsar na de)," he further said.