Aamir Khan Lost Lots Of Kilos Between Dangal And Thugs Of Hindostan. Another Transformation

Aamir Khan's next film is Thugs Of Hindostan, for which the 52-year-old actor has worked out to return to his regular weight - 70 kilos, which is also under what he weighed while filming PK and Dhoom3 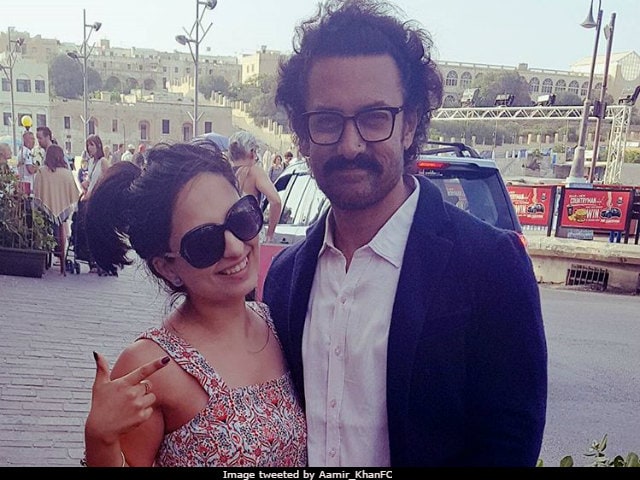 New Delhi: Aamir Khan's physical transformations during his Dangal days shocked and stunned everyone twice over. He sized upto 90-95 kilos to play the protagonist in the Nitesh Tiwari-directed wrestling drama and shed that extra weight to also feature as the younger version of Mahavir Singh Phogat, the Haryanvi wrestler he was starring as. His next film is Thugs Of Hindostan, for which the 52-year-old actor has worked out to return to his regular weight - 70 kilos, which is also under what he weighed while filming PK and Dhoom3. Aamir has managed to shed the extra poundage following a strict work out regime for the past six months and currently stands at his recommended weight.

Meanwhile, the actor is currently shooting Thugs Of Hindostan in Malta. Recently a photograph of the actor from the sets of the film was shared by a fan, which went crazy viral. Amitabh Bachchan and Aamir's Dangal co-star Fatima Sana Shaikh have also joined him on the sets.

THUGS OF HINDOSTAN BEGINS @aamir_khan with a crew member in Malta pic.twitter.com/D41LXSZS7P

In 2015, Aamir complained of difficulty in breathing and trouble walking when he was filming his parts as the older version of the wrestler for Dangal. While his family and friends were worried for his health, Aamir, also known as Mr Perfectionist, lost 25 kilos in just five months. A video of his 'fat to fit' transformation was released earlier last year and sent the Internet into a meltdown. Aamir's trainer Rahul Bhatt told mid-day that the actor wanted to look like an athlete, so he trained like one. The actor's work out regime began as early as 4:30 in the morning and continued for 5 hours a day. His routine also included a regular dose of running and cycling, if not more.

Promoted
Listen to the latest songs, only on JioSaavn.com
Thugs Of Hindostan is Aamir's first movie with Big B and his second collaboration with both Dhoom 3 director Vijay Krishna Acharya and Fatima.

Thugs Of Hindostan is scheduled to arrive in theatres on Diwali next year.

Got An Offer To Join Rebel MLAs In Guwahati But I Refused, Says Shiv Sena's Sanjay Raut