Those rescued from Simikot have been moved to Nepalgunj and Surkhet, the two towns close to the Indian border that have better health care and infrastructure facilities. 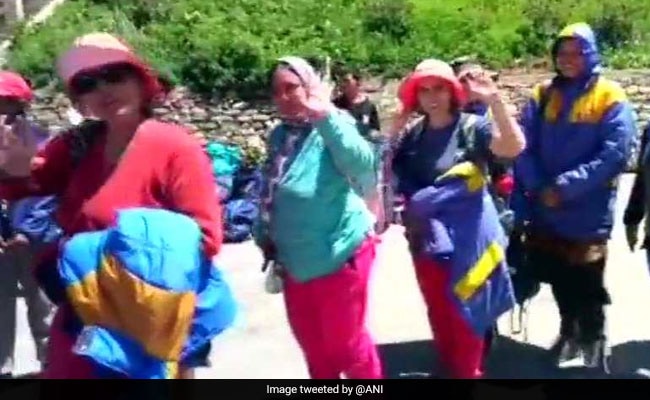 Over 1,200 Indian pilgrims were moved to safety from Nepal's mountainous Simikot region today, the Indian embassy in Kathmandu said, as efforts continued to evacuate those stranded in Hilsa while returning from the Kailash Mansarovar pilgrimage in Tibet amidst inclement weather.

Those rescued from Simikot have been moved to Nepalgunj and Surkhet, the two towns close to the Indian border that have better health care and infrastructure facilities.

"As on today, with concerted efforts, a total of 1,225 stranded pilgrims were airlifted from Simikot to Nepalgunj and Surkhet. For pilgrims airlifted to Surkhet, the embassy also put in bus service to ferry pilgrims to Nepalgunj," the Indian mission in Kathmandu said in a statement.

"The embassy also worked with tour operators to airlift around 675 stranded pilgrims at Hilsa to Simikot for onward evacuation to Nepalgunj and Surkhet," the statement said.

During the evacuation process, 74 commercial flights were operated and the embassy additionally pressed in private Choppers MI-16 along with Nepal Army helicopters that made more than 142 sorties in the difficult terrains of Hilsa-Simikot-Nepalgunj sectors, according to the statement.

Earlier today, an Indian embassy official at Simikot told PTI that the number of stranded pilgrims in Hilsa, near the Tibet border, was "almost nil" now.

The official said several of the pilgrims who were moved to Surkhet and Nepalgunj have already begun their onward journey to India.

The Uttar Pradesh government has assisted in the process by deploying its state transport buses, the official said.

Yesterday, 275 pilgrims were evacuated from Hilsa, taking the number of people who have been moved to safety in the last three days to 675, the Indian Embassy had said.

The mission had yesterday said its camp offices were fully functional in Simikot and Surkhet.

Yesterday, the Indian embassy also issued a revised advisory for the prospective pilgrims today, suggesting medical examination before taking up the yatra.

The embassy had launched the rescue operation after more than 1,500 Kailash Mansarovar pilgrims were stranded in Hilsa and Simikot on Monday due to inclement weather.

"As part of the rescue operations, the embassy deployed and dispatched its officials and representatives, with medicines, in all the affected areas i.e, Hilsa, Simikot, Nepalganj and Surkhet to facilitate possible assistance, including medical check-ups of elderly and ailing pilgrims," it said.

It had also set up a hotline for pilgrims and their family members, which also comprises of other language speaking staff for Tamil, Telugu, Kannada and Malayalam speakers.