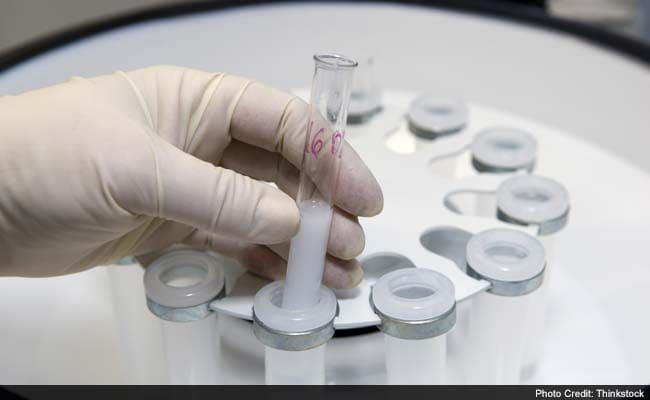 After another four molecules were added, the endoderm cells divided rapidly, allowing more than a trillion-fold expansion. (Representational Image)

Los Angeles: Scientists have successfully converted human skin cells into functional pancreatic cells, a breakthrough that may lead to a personalised cell therapy for diabetics and spell end for daily insulin injections.

The new cells produced insulin in response to changes in glucose levels, and when transplanted into mice, protected the animals from developing diabetes, researchers said.

The study presents significant advancements in cellular reprogramming technology, which will allow scientists to efficiently scale up pancreatic cell production and manufacture trillions of the target cells in a step-wise, controlled manner.

"Our results demonstrate for the first time that human adult skin cells can be used to efficiently and rapidly generate functional pancreatic cells that behave similar to human beta cells," said Matthias Hebrok, director of the Diabetes Centre at University of California, San Francisco (UCSF).

"This finding opens up the opportunity for the analysis of patient-specific pancreatic beta cell properties and the optimisation of cell therapy approaches," said Mr Hebrok.

In the study, the scientists first used pharmaceutical and genetic molecules to reprogramme skin cells into endoderm progenitor cells - early developmental cells that have already been designated to mature into one of a number of different types of organs.

With this method, the cells do not have to be taken all the way back to a pluripotent stem cell state, meaning the scientists can turn them into pancreatic cells faster.

The researchers have used a similar procedure previously to create heart, brain, and liver cells.

After another four molecules were added, the endoderm cells divided rapidly, allowing more than a trillion-fold expansion.

The scientists then progressed these endoderm cells two more steps, first into pancreatic precursor cells, and then into fully-functional pancreatic beta cells.

The cells protected mice from developing diabetes in a model of disease, having the critical ability to produce insulin in response to changes in glucose levels.

"The final step was the most unique - and the most difficult - as molecules had not previously been identified that could take reprogrammed cells the final step to functional pancreatic cells in a dish," Mr Zhu said.

"This new cellular reprogramming and expansion paradigm is more sustainable and scalable than previous methods," said Sheng Ding, a senior investigator in the Roddenberry Stem Cell Centre at Gladstone.

The study was published in the journal Nature Communications.