Rubina Dilaik's Note For Husband Abhinav Shukla Is All About Love 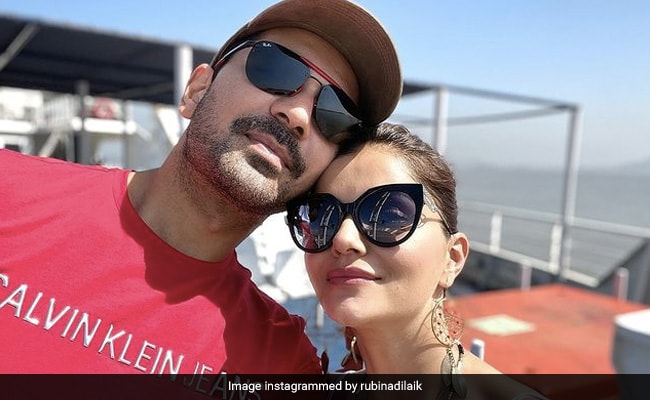 There is no dearth of power couples in the Indian television industry but if we ever had to make a list, actress Rubina Dilaik and her husband, actor Abhinav Shukla are sure to be right on top.  In addition to enjoying an enviable individual fan base, the couple also won hearts around the world when they appeared together on the reality show Bigg Boss 14. Soon after the show ended earlier this year, Abhinav flew to Cape Town to be a part of the reality stunt show Khatron Ke Khiladi 11. But even distance could not keep the couple from expressing their love for each other and Rubina's new Instagram post on their wedding anniversary is proof.

Sharing a video montage of Abhinav's candid moments during one of their vacations, Rubina wrote, "You are my strength, you are my weakness! You are my light, you are my darkness...You are the storm, you are the calmness...I feel blessed growing every day with you, and enjoying our madness...Love you, ma munchkin," tagging Abhinav. The mushy post sure caught Abhinav's attention, who made quite the statement by leaving a kiss emoticon in the comment section.

Fans and colleagues of the duo seemed to approve of the sweet note, with actor Aly Goni dropping a few cute emojis in the comment section. Reacting to the post, one fan wrote, "Happy anniversary my most beautiful and most precious Rubinav."

The actress also recently shared another Reels where she is seen wanting to "eat up" Abhinav. The adorable post soon had fans cheering for the couple.

Rubina and Abhinav had confessed on Bigg Boss 14 that they were at the brink of separation before entering the show and had opted to appear together in an attempt to save their relationship. During the course of the show -- which Rubina went on to win -- viewers saw the couple mend their marriage.

Rubina Dilaik has only recently recovered from COVID-19. She spent time recuperating at her family home in Shimla, along with her parents and sister. She is best known for her work in television series such as Choti Bahu - Sindoor Bin Suhagan, Punar Vivah - Ek Nayi Umeed and Shakti: Astitva Ke Ahsaas Ki. Abhinav rose to fame with his stint in shows such as Ek Hazaaron Mein Meri Behna Hai, Hitler Didi and Badalte Rishton Ki Dastaan.