Yes, That Is Ranbir Kapoor On Alia Bhatt's Phone Wallpaper. See What She Posted

Alia Bhatt was also asked when is she getting married 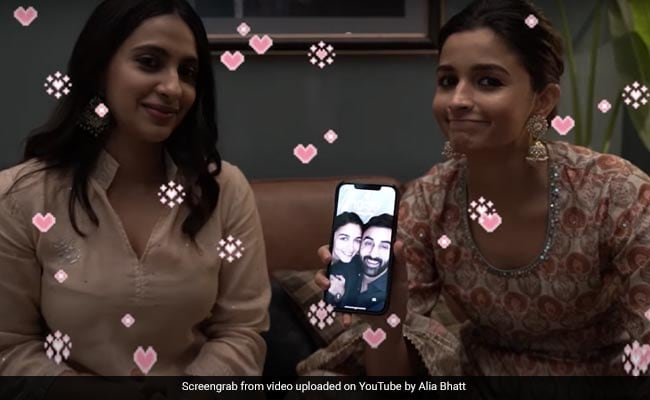 Alia Bhatt in a still from the video. (courtesy youtube)

Alia Bhatt, on Saturday, shared a new vlog on her YouTube channel. The vlog titled "A day in the life of Alia Bhatt," showcases different facets of the actress' life. In one segment, she can be seen shooting for a commercial. Another one features her bestie Akansha Ranjan Kapoor. In another segment, Alia answered a few questions by her fans. When asked about her phone wallpaper, she turned her phone towards the camera to reveal a picture of herself with boyfriend Ranbir Kapoor. Another question that Alia was asked was when is she getting married? The actress simply smiled and shrugged.

On Ranbir Kapoor's 39th birthday, Alia Bhatt shared a glimpse from their date in Jodhpur and she captioned it: "Happy birthday, my life." See the post here:

Ranbir Kapoor confirmed his relationship with Alia Bhatt in an interview last year, where he referred to her as his "girlfriend" and said that if it weren't for the pandemic, they would have been married. Fans of Alia Bhatt and Ranbir Kapoor will get to see them share screen space in Ayan Mukerji's Brahmastra.

Alia Bhatt will next be seen in Sanjay Leela Bhansali's Gangubai Kathiawadi and SS Rajamouli's RRR. She will also star in Darlings, which she is producing. She will also be seen in Farhan Akhtar's Jee Le Zaraa with Priyanka Chopra and Katrina Kaif and Karan Johar's Rocky Aur Rani Ki Prem Kahani with Ranveer Singh.

Other than Brahmastra, Ranbir Kapoor has Shamshera, co-starring Vaani Kapoor and Sanjay Dutt, lined-up. He will also be seen in an untitled film with Shraddha Kapoor. The actor will also star in Sandeep Reddy Vanga's Animal, with Anil Kapoor and Parineeti Chopra.