Read inOther Languages
This Article is From May 30, 2020

"Wish Me Luck As You Wave Me Goodbye": Neetu Kapoor Remembers Rishi Kapoor A Month After His Death

"Give me a smile, I can keep for a while," wrote Neetu Kapoor 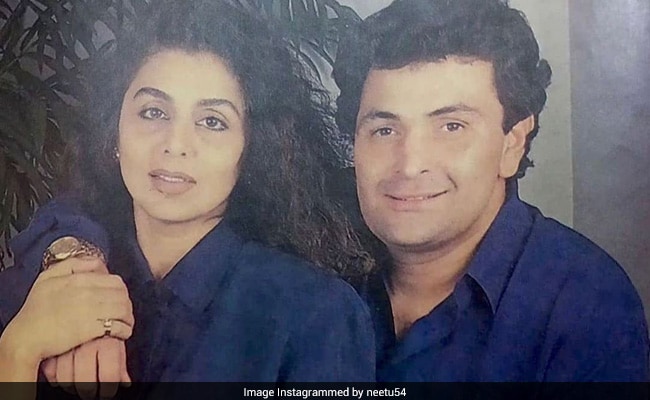 A month after actor Rishi Kapoor's death, his wife, actress Neetu Kapoor, paid a tribute to him with an emotional post on social media. Rishi Kapoor died after battling cancer in Mumbai on April 30. He was 67. Remembering her husband, Neetu Kapoor shared a priceless photo of themselves from their family album and accompanied it with a touching note. She borrowed a few lines from Phil Park and Harry Parr-Davies' song Wish Me Luck As You Wave Me Goodbye and wrote: "Wish me luck as you wave me goodbye. Cheerio, here I go on my way. With a cheer, not a tear, in your eye. Give me a smile, I can keep for a while. In my heart while I'm away." The throwback photograph features Neetu and Rishi Kapoor twinning in blue outfits.

"Wish me luck as you wave me goodbye Cheerio, here I go on my way With a cheer, not a tear, in your eye Give me a smile, I can keep for a while In my heart while I'm away

Rishi and Neetu Kapoor's daughter Riddhima Kapoor Sahni also shared a heart-wrenching post for her dad on Saturday and accompanied it with a few lines from Maya Angelou's poem A Great Soul. Take a look:

"A Great Soul" by Maya Angelou "A great soul serves everyone all the time. A great soul never dies. It brings us together again and again." We love you Papa

Two days after the actor's demise, she bid him farewell with a note that read: "End of our story."

End of our story

Rishi Kapoor was not only known for his brilliant acting but also for his sense of humour and his zest for life. He was one of the most-loved members of the film fraternity. He was admitted to a Mumbai hospital on April 29 with a colon infection. He died the next morning. The late actor battled cancer for two years and spent most of last year undergoing treatment in New York.

Neetu Kapoor, her son Ranbir Kapoor and daughter Riddhima organised a close-knit prayer meet for the actor on May 2 and immersed his ashes in Mumbai's Banganga the next day in the presence of a few close friends including Alia Bhatt and filmmaker Ayan Mukerji.