Who's The Best Chef In The House? Twinkle Khanna And Akshay Kumar Answer

Twinkle, who had previously confessed that she cannot cook, face-palmed when one of her little fans asked her about the "best chef in the house." 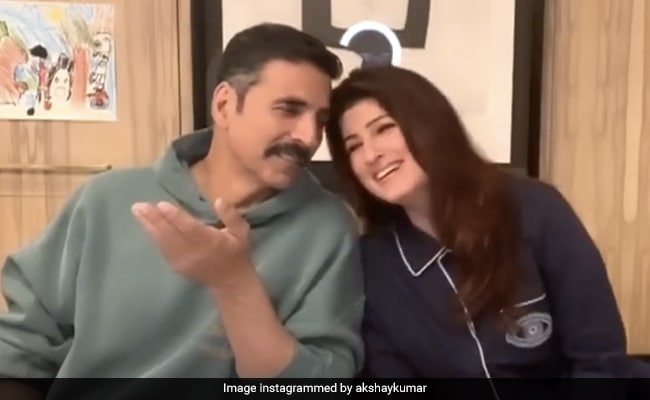 Akshay and Twinkle in a still from the video (courtesy akshaykumar)

It's a fine day as we got to catch up with Akshay Kumar and Twinkle Khanna together. In a video for Tweak India, which is Twinkle Khanna's digital venture, the star couple made several ROFL revelations, including who the best chef in the house is and their favourite superheroes. Twinkle, who had previously confessed that she cannot cook, face-palmed when one of her little fans asked her about the "best chef in the house." Though Akshay makes chocolate paranthas on the weekends, both he and Twinkle agreed that the "Best Chef" title should go to their son Aarav. "I'm the second best," said Akshay. Twinkle, who is the queen of wits, added: "He knows how to fry my brains, he knows how to boil my blood." LOL.

Akshay and Twinkle also introduced two new books launched by Tweak India in the video, one of which made way for this joke on Twinkle Khanna's cooking skills: "And maybe Tina (Twinkle) can finally shed her hopeless chef title by trying the recipes from this amazing cookbook, What's In Your Dabba," as per Akshay.

Talking about their favourite superheroes, Akshay said it has always been Tarzan while Twinkle said that real-life role models are the actual superheroes for her. Watch the super fun video of Akshay and Twinkle here:

Facing the most fearsome interviewers... @tweakindia put me and @twinklerkhanna in the hotseat and we had to spill our secrets, right from who's our favourite superhero to the best chef in our household. Loved learning about the real-life heroes in the new children's book from Tweak Books, When I Grow Up, I Want To Be. And maybe Tina can finally shed her hopeless chef title by trying the recipes from this amazing cookbook, What's In Your Dabba?

Meanwhile, here are some glimpses of what comes out of the kitchen when Aarav puts on the chef's hat:

My teenager makes us dinner and dessert all by himself :) On the menu- mushroom risotto, miso avocado salad, chicken skewers and chocolate soufflé #proudmama

Akshay Kumar recently featured in an episode of Into The Wild with Bear Grylls. His has a long list of upcoming movies include Bachchan Pandey, Bell Bottom, Laxmmi Bomb, Sooryavanshi, Prithviraj, Atrangi Re and Raksha Bandhan. Twinkle sports many hats - she's an author, a columnist, an interior designer, a producer and also a Twitter humourist.